October 24, 2011 by Max Lindenman
"Like" the Patheos Catholic Page on Facebook to receive today's best commentary on Catholic issues. 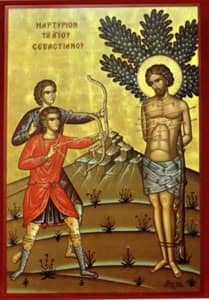 A few weeks ago, while reviewing my list of Facebook friends, I noticed that an awful lot of them wore clerical collars in their avatars. Others had chosen images of St. Francis and the Holy Spirit, or liked to invoke the aid of Blessed Kateri Tekawitha in their status updates. Just the other night, I dreamed I was sitting in a train station with Thomas Merton, which didn't strike me as the slightest bit odd.

For years, I've taken a furtive pride in my sense of dual citizenship in the Church and the World. Now I've got to face facts: at some point—maybe when I was sleeping—the Church won out. I am now making Catholic contacts, filling my space with Catholic images, and thinking Catholic thoughts.

Is this a good thing? Many would say so. "Catholic identity" has been a hot topic, not to mention a Churchwide ideal, since Pope John Paul II published Ut Unim Sint. (Or was it Ex Corde Ecclesia?) Either way, you get the idea. John Allen, Jr. predicts that Catholics will increasingly take to emphasizing "unique markers of identity, in order to defend itself against assimilation to the majority." It's time to dig those trenches, so put your backs into it.

Allen, and others, speak of this entrenching as a conscious response to an increasingly hostile world. Citing an Illinois law that requires adoption agencies to place children with same-sex couples, Russell Shaw warns of "a tight-lipped campaign of secularist inspiration in which the coercive power of the state is brought to bear on church-related institutions to act against conscience or go out of business." Unless Shaw is shouting into the wind, many Catholics will mark their identities with an enhanced political consciousness.

I'm iffy on this part. For most of my life, I've enjoyed the freedom that comes from belonging to no self-conscious interest group. Call it white-boy privilege if you like, but it's made democracy feel more like a sport than a struggle for survival. I'm not sure I'm ready to accept that my chief goal in casting my vote—my precious vote—should be protecting the Church from some sort of diminution. That forces me into too tight a corner.

But if I haven't been driven into the bloc, I have been enfolded in the Body. The carrot is a shared cultural framework.

Now that I've started marking time by the liturgical calendar—Whose feast day is it today? How long till Advent?—it seems natural to pal around with people who will have the slightest idea what I'm talking about. Ex-Catholics will do in a pinch; in my experience, about half can reminisce with some fondness about their days in the pews, especially when a friend shows up for dinner smeared with ashes. Faith-sharing with Mormons and evangelicals can lead to some delightful discoveries. ("They bring the communion bread to you? Are you people flying first-class or what?") But when I feel like kvetching about a church without a kneeling rail, I need someone who winces in real and automatic sympathy.

Catholicism is also a muse. As a writer, I need material like I need oxygen, and the Church never seems to come up short. It's provided job opportunities. Because she's chock-full of paradoxes—sublime truths in custody of a very mundane institution, an objective Reality that draws a good part of its power from subjective experience—the world of Catholic letters is always hiring. We've got open slots for policy analysts, apologists, theology wonks, and mommy bloggers. To my surprise, there's even a ready niche for me, a Catholic gadfly.

A few weeks ago, I wrote that kids seemed to respond well to stories of terror and misery—including reports of hell. In support of the point, I quoted Bruno Bettelheim and Adam Gopnik. One was a Freudian psychoanalyst, the other is a New Yorker columnist. Since neither is Flannery O'Connor, I was committing an act of some originality and some daring—in short, making a statement. If you remember that scene in Borat, where Sacha Baron Cohen brings a barely dressed black woman to a gathering of Alabamans who look like veterans of the White Citizens Council, you'll get the general idea. My piece was received even more cordially than Baron Cohen and his date. The tent is big.