October 03, 2011 by Tim Muldoon
"Like" the Patheos Catholic Page on Facebook to receive today's best commentary on Catholic issues. 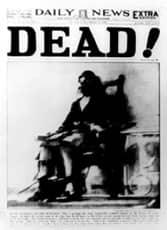 This past week I was one of 324 signers of "A Catholic Call to End the Death Penalty," penned in the wake of the executions of Troy Anthony Davis and Lawrence Brewer. This past week also saw the killings of Anwar Al-Awlaki and Samir Khan by U.S. forces. The confluence of these events raises questions about when a community judges it right to order the killing of people.

To turn the tables around, though, let us consider for a moment the opposite question: why should a community be worried about killing at all? It happens in nature all the time, and is part of the normal functioning of the food chain. Why do people wince at killing people, when they generally have no issue with killing cows or chickens or plants or trees? Why do human beings impose laws and morality to limit the amount of people-killing? Why, in short, do human beings have a conscience about the killing of people?

Studies in evolutionary psychology, for example, tell us something about the ways our brains react to revenge. We can hypothesize about the ways that human societies evolved to limit vengeance, as in the Code of Hammurabi or the Torah. We can trace the development of various ethical and legal theories; we can do comparative studies of different cultures over time and in the contemporary world; we can study different religious and moral systems around the world in their attitudes toward killing.

But the basic question, it seems to me, is why we have ever valued human life at all. Why have human beings ever cared about other human beings? Why has the death of a human being ever been of any more value than the fly I just smashed?

Pondering the import of that question gets us pretty close to the foundation of Natural Law. In the final analysis, there are really two possible foundations for opposing killing: one is a kind of positivism, the other Natural Law. And only Natural Law is capable of shaping a good society today.

Positivism, or "positing" that killing is wrong, is the favored explanation of non-theists, who will trace it to evolution, or to some development of social contracts that then shape later societies. While there is clearly some truth to that explanation, I find it dissatisfying because it doesn't explain where the initial impetus to prevent killing comes from. Further, it makes contemporary proscriptions of killing little more than parroting some ancestor's good idea. In a speech last week at the German Bundestag, Pope Benedict XVI suggested that a positivistic approach to reason is like a concrete bunker with no access to the outside world, a fabrication of the mind. It fails to open itself to the vast sweep of history, of thousands of cultures who have come to recognize basic insights about the human condition. Positivism is a weak form of prohibiting killing, because it roots itself in nothing stronger than social opinion, which can easily change from one generation or culture to the next.

Conversely, the Natural Law explanation is simply an acknowledgement that human beings are subject to an order which they themselves did not create. It was probably the Stoics (c. 4th century BC) that first articulated that insight. The philosopher Cleanthes, for example, wrote in a Hymn to Zeus:

all the works of nature came to be established,
and with it you guide the universal Word of Reason which moves through all creation....