The Church and New Media: A Book Excerpt 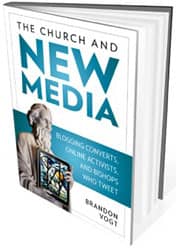 The Church and New Media: Blogging Converts, Online Activists, and Bishops Who Tweet
By Brandon Vogt

The Church and Old Media

Christianity reveals a God who uses all sorts of media to get his message across, from pillars of fire to bright stars, from burning bushes to a talking donkey. He delivered the Ten Commandments on chiseled rock, painted rainbows to signal his covenant, and used a cross to display his love.

However, the Bible doesn't mention God using emails, blog posts, podcasts, or e-books—and when the prophet Habakkuk [2:2] quotes God saying, "Write the vision; make it plain upon tablets, " he wasn't promoting iPads, either! Even though these technologies don't show up in Scripture, history has shown that God showers down new mediums at specific times to spread his Word in new ways.

For its first one-and-a-half thousand years, Christianity's dominant form of communication was hand-copied print, with parchments, scrolls, and books transmitting sacred writings. These texts were used in the liturgy and were proclaimed at special religious gatherings. During these early centuries, if Christians wanted to absorb pieces of Scripture, they typically had to find a community that would read them aloud.

The 15th century, however, saw Christianity's first major communication shift. When Johannes Gutenberg invented the movable-type printing press, he influenced not only what Christians communicated but how. Through Gutenberg's invention, religious texts were quickly produced, copied, and disseminated across the world. This shifted the focus of Christianity from listening to reading, from the community to the individual, and from concrete images to abstract theology.

Roughly 450 years after this radical change, a new technology called "radio" entered the scene. The Catholic Church was one of the first to harness this new medium, with the charismatic Fulton Sheen beginning his weekly Catholic Hour in 1930.1 The show's audience grew quickly, and after two decades, four million people tuned in each week to hear America's most famous evangelist.

In 1951, Sheen was appointed auxiliary bishop of New York and soon moved—along with the Church—to the world's next new technology: television. Sheen's Life is Worth Living show continued his radio success, attracting 30 million weekly viewers at its peak.2

Sheen wasn't alone as a prominent Catholic television personality. In 1981, Mother Angelica debuted EWTN, the Eternal Word Television Network. The network's early programming was broadcast from a garage at Our Lady of the Angels Monastery in Alabama. Today, EWTN is the largest religious media network in the world, reaching more than 146 million homes in 127 countries.3

Throughout history, the Church aptly discerned the power of each of these past technologies—print, radio, and television—even in light of each medium's disadvantages. But while the Church recognized the potency of these prior tools, nobody could have foreseen the power of what came next.

In 1943, the president of IBM purportedly claimed that "there is a world market for maybe five computers. " A few decades later, the president of another technology company asserted, "There is no reason anyone would want a computer in their home. "  4

In hindsight, neither man could have been more wrong. The last few decades have witnessed a digital explosion unimaginable 50 years ago, sparked by the advent of the Internet and its World Wide Web.

As in earlier times, the Church was quick to adopt these new tools. The Vatican created one of the Internet's earliest sites in 1995, making many Church documents available on the Web. The Vatican webpage modeled the style of most other pages over the next half-decade: static, information repositories featuring one-way communication—from the website to the user.

But a second wave of innovation began with the new millennium. The early 21st century introduced the burgeoning New Media, encompassing blogs, social media, text messaging, and other digital tools.

Though the classification is nebulous, New Media has many typical features that distinguish it from its predecessors.

New Media usually provides on-demand access to content anytime, anywhere, on any digital device,5 accomplishing this through the vast interconnectivity of the Web.

But a primary, defining characteristic of all New Media is dialogue. While traditional media features static content and one-way flows of information—like the Vatican's early website—New Media transmits content through connection and conversation. It enables people around the world to share, comment on, and discuss a wide variety of topics. Unlike any of the past technologies, New Media is grounded on interactive community.