October 12, 2011 by Pat Gohn
"Like" the Patheos Catholic Page on Facebook to receive today's best commentary on Catholic issues. 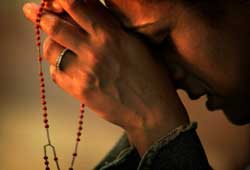 I have an aversion to being called a "Rosary rattler." But to those who know me, this isn't news.

That was the name the local hipsters dubbed the so-called blue-hairs kneeling before Mass petitioning the Blessed Virgin Mary as they fingered the long beads that inevitably clacked against the backs of the pews before them.

As I later found out, the Rosary was not just the prayer of the old folks, or traditionalists clinging to a bygone era; I grew to love it in my late 20s—when I still had my natural hair color—but I had a way of softly holding the crucifix of the Rosary cupped in my left hand, slowly moving the bead count with my right. No rattling to disturb my neighbors, and definitely a bit more stealth than a dangling chain swinging against a wooden pew.

My white-haired grandmother, Henrietta, owned a beautiful rosary with tiny delicate pearlescent beads. She kept it on her bedroom bureau in a small metal. Whenever I'd visit her apartment, I'd wander in and play with those beads. I had no real concept about prayer or its value at the time. But I dearly remember when those beads came into my possession. Nana's legacy of prayer was handed on to me at my First Holy Communion. Sadly, I ignored the magnitude of the true gift of that rosary for many years.

I came to the Rosary, and really, to Mary, during the white-knuckled medical stresses of my first pregnancy. Prior to that, I always went to Jesus in prayer for help. My small mind reminded me that Jesus never had a baby. What I needed was some "girl talk"; I longed for a strong feminine connection.

I'm only guessing, but I think Jesus used that opportunity to introduce me to his mother.

A woman who was a little older than me, and about ten years into parenting, befriended me, and spoke to my angst about motherhood. As a mother of three, she gently encouraged me to look to Mary for help and example. I was so low, and so sick from all-day "morning" sickness, that I couldn't muster a reason to argue.

So, I daily opened Nana's pretty metal box and desperately prayed those Rosary prayers. They became a lifeline thrown to me in a drowning sea. I asked Mary to pray for me and with me. Very slowly, over those nine months, I began to see what was missing. I had kept Mary on a distant shelf, like a statue, or like my forgotten beads in their box. In time she became no longer an icon, but a living, holy presence.

Mary became a friend who was a powerful intercessor. She mothered me through my fears by pointing me to a deeper relationship with her Son and my Heavenly Father.

To recite the Rosary is nothing other than to contemplate with Mary the face of Christ. (John Paul II, Rosarium Virginis Mariae, par. 3)

By reputation the Rosary is dedicated to Mary, yet it is the most Christ-centered prayer I had ever encountered. It is a deep meditation on the life of Christ, with scriptural support from beginning to end. And it is simple enough that even a child could pray it. It has powerfully renewed my faith.

Because she gives us Jesus, her son, Mary is Mother of God and our mother; we can entrust all our cares and petitions to her: she prays for us as she prayed for herself: "Let it be to me according to your word." By entrusting ourselves to her prayer, we abandon ourselves to the will of God together with her: "Thy will be done." (Catechism of the Catholic Church, par. 2677)

Pondering Mary's faithful, grace-filled life amidst trials and sorrow, joys and glories, helped me embrace my own relationships and circumstances with prayer and understanding. Or, at least Mary helped me do it better than I might do on my own.

In short, Mary and the Rosary have been the antidote for whatever has ailed me. When it came to the big mysteries of life—mostly because the Rosary was centered on the mysteries of Christ's life, and Mary's responsiveness to them—the mysteries in my own life became clearer. And the ones that I couldn't figure out, I was often given the grace to muddle through.