Ever-Present Yes: An Interview with Fr. Robert Barron on "Catholicism; A Journey to the Heart of the Faith"

October 01, 2011 by Elizabeth Scalia
"Like" the Patheos Catholic Page on Facebook to receive today's best commentary on Catholic issues. 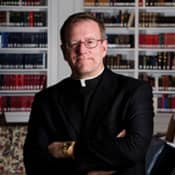 Patheos' Book Club is particularly pleased to feature Father Robert Barron's book Catholicism: A Journey to the Heart of the Faith. A companion to Fr. Barron's acclaimed Word on Fire video series (and its study program) Catholicism, the book is being widely and enthusiastically reviewed as a profound and extraordinarily instructive overview of what Catholicism is and is not, what Catholics believe, and why they believe it. Here Father Barron discusses the motivation for undertaking "The Catholicism Project" and how both practical and mystical perspectives co-exist and enhance understanding within the Church.

Father Barron, you've been tantalizing Catholics—particularly Catholics who are hooked into new media—with thoughtful videos and gorgeous pictures related to The Catholicism Project for well over a year, now. What was the impetus behind the project—what made you begin this huge undertaking?

The impetus behind the Catholicism series, book, and study program is the mandate Christ gives to the Church to preach the Gospel to all the nations and to draw all people to share in his life in the Church. Contrary to popular perceptions, the Church is not simply a religious discussion club, an expression of ethnic identity, or some kind of faith-based bureaucracy. These kinds of presumptions about the nature of the Church have acted to inhibit the Church's fulfillment of Christ's mandate, and I am hoping that Catholicism generates a different kind of momentum in terms of how Catholics understand the Church and how they understand the manner in which the Church engages culture. My sense is that the Church is the means Christ uses to announce to the world his identity and mission. Accompanying this announcement is an invitation to participate in a new and transformative way of life—a life in which Christ is at the center of thought and action. This participation in Christ happens in relation to the Church.

What made me begin this undertaking was fidelity to the Lord's command to preach the Gospel, but also a keen awareness that was shared by all the members of the Word on Fire team that the Church needed a new way of expressing its fundamental teachings both "ad intra" and "ad extra." Existing paradigms for catechesis and evangelization are at the limit of their efficacy, and cannot bear the weight of internal pressure cause by the sex abuse scandal and the external pressure caused by secularist ideology. Further, it seems to me that the media, in both "old" and "new" forms, provide the means to accomplish the mission of evangelization with an effectiveness that has never before been possible.

The Church has throughout its history used the best means available to communicate the power of the Gospel: from Roman roads to Gothic architecture, from the high art of the Renaissance to the printing press, and most recently through a vast international network of institutions. No one of these methods suffices for all times and circumstances. We are never done with catechesis and evangelization, and it would be a tragedy if the Church did not marshal its resources and use emerging technologies to extend the invitation to participate in Christ's life in his Church. I hope the Catholicism series with all its related materials inspires Catholics to envision the good things that can be accomplished with the tools of media in forms both traditional and contemporary.

Many would suggest that in mainstream media, Catholicism gets a bad rap—news outlets are not always objective in their coverage, whether the story is about Catholic scandals or celebrations, and films, television, literature do not seem interested in making serious explorations of Catholic characters, particularly priests and religious. Were you responding to that at all?

It can certainly be argued that the current ethos of the media culture is enamored of controversy and limited by the constraints of ideological secularism. If this is the ethos then it should come as no surprise that the reporting on religion by the mainstream media is characterized with either disinterest or such a pronounced hermeneutic of suspicion that egregious errors in reporting are overlooked so that the purveyor of a story can make their point.