By the time this article is published, a wave of obituaries on the life of Steve Jobs will have appeared in print and online. The assessments have rightly lionized him for what he was: a creative genius, entrepreneur, visionary and once-in-a-generation inspiration.

That was the way of Steve Jobs. He was sophisticated, yet simple. When he decided Apple should produce a smartphone, he reportedly told the engineers that ever since he was a kid, he hated shirts with buttons, so he didn't want his phone to have too many buttons either. Soft spoken, he let the quality of his work do the talking for him.

In an age in which technology often seems so dirty, the shiny devices he held in his hands seemed clean. To the guys who got pushed around by football players in high school, Steve Jobs made geeks look cool, and, perhaps even more importantly, held out hope for us that they win in the end.

Like any great hero story, Jobs' biography was filled with thrilling highs and gut-wrenching lows. His was the ultimate American success story, starting Apple in a garage with his pal Steve Wozniak, and going on to build the greatest, most innovative, successful and easy-to-use technology products of all time.

When Jobs lost a power struggle with the company's board in 1986, he was sent into exile. When he returned in 1996, Apple was in a full-scale design, management and philosophy crisis. Jobs moved quickly to restore confidence in the Mac by making a deal with the man we Mac users then saw as the enemy: Bill Gates. But by the time Apple released the "I'm a Mac. I'm a PC" commercials just a few short years ago, the verdict was in: Steve Jobs had the last laugh.

But there was something more to what Jobs did with Apple than offering products with great design and superior usability. He made us feel different about ourselves, even good about life, when we powered up our Mac and heard the massive last chord struck on The Beatles' "Sergeant Pepper's Lonely Hearts Club Band."

I can still vividly remember watching the Super Bowl when Apple's now famous "1984" commercial aired. A monochrome crowd sat stone-faced and motionless, receiving orders from a totalitarian regime leader on a giant screen, when suddenly a girl dressed in red like an Olympian raced down the center aisle and hurled a hammer which smashed the screen and disrupted the propaganda of the machine. Then the following words scrolled onto the screen read by a confident, yet playful voice: "On January 24, Apple Computer will introduce Macintosh. And you'll see why 1984 won't be like '1984.'"

It was a smart, subversive and funny way to promote a new computer. But even better yet, to a suburban lone-wolf kid like me, it did something far more. It made using a Mac feel like an act of defiance—a protest against everything that was wrong, oppressive and broken with the "system."

The passing of Steve Jobs comes at a particularly bitter time for America. Many folks feel like they're back in that scene from 1984, helpless and locked into a society that is cold and indifferent to them as individuals. For me, Apple's homepage Wednesday night—which read simply "Steve Jobs: 1955-2011"—felt like the death of Superman.

But this is America, where heroes are born and proved. And somewhere out there, there's a kid in his garage who is furiously working away on some new innovation, and thanks to Steve Jobs, still dreaming.

John Paul II, Benedict XVI and Francis All Did Ashes on the Crown
Matthew Schneider
3 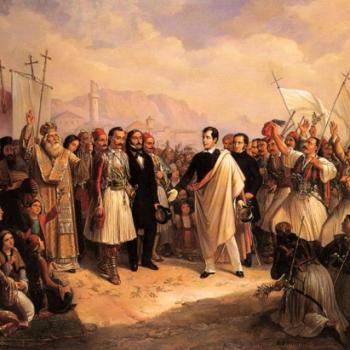 Lord Byron Got One Big Thing Right (Greek Bicentennial)
John Mark N. Reynolds
Get Patheos Newsletters
Get the latest from Patheos by signing up for our newsletters. Try our 3 most popular, or select from our huge collection of unique and thought-provoking newsletters.
From time to time you will also receive Special Offers from our partners that help us make this content free for you. You can opt out of these offers at any time.
see our full list of newsletters
Editor's picks See all columnists