October 13, 2011 by Marcia Morrissey
"Like" the Patheos Catholic Page on Facebook to receive today's best commentary on Catholic issues. 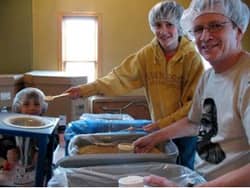 This past week I brought my oldest granddaughter with me to volunteer as a food-packer at Feed My Starving Children (FMSC), an organization committed to feeding the hungry in places as disparate as Belarus, Mexico, Niger and North Korea.

I have taken her with me before, and when I asked her if she would like to go, my granddaughter was so excited; she loves sharing this volunteer opportunity with me.

Before each packing session, we are given strict FDA guidelines to follow. The packing has to be surgically clean; bacteria that probably wouldn't bother us could be potentially fatal for the children in places like Haiti, where without this program parents often resort to feed their children "biscuits"—dried mud patties—to fool their starving stomachs.

We heard the story of a 14-year-old girl who came to an orphanage and was first thought to be pregnant. A medical examination revealed a stomach full of pebbles she had eaten, to try to alleviate her hunger pains. After surgery, and getting on the FMSC food program, her life was saved—and just in time.

FMSC was founded by a Minnesota businessman who, in 1987, after making a humanitarian trip to Honduras, felt called by God to organize a Christian non-profit aimed at feeding the seriously malnourished, starving children of the world. He contacted food scientists to develop a formula of rice, soy, dehydrated vegetables, and a highly enriched vitamin and mineral vegetarian chicken-flavored mix that was more easily digested by children who were at the brink of death from starvation.

Each of the "MannaPacks" we assemble contains six cups—one cup per serving; one meal a day. It's not much but for these children it is enough to turn their health around and save their lives. The food is greatly enhanced with nutrients in order to make that difference, even for one meal a day.

During severe malnutrition the internal organs begin to shut down. At that point the body will reject almost anything taken in, and so these formulations are especially designed to be digested quickly, so the body doesn't have time to react and dispel it. This is crucial for survival. Some of these children are so badly off that they have to begin very slowly, with just a few tablespoons of food, and work their way up to retaining a cup of food.

In 1993, a providential meeting with a church group inspired the model for the "volunteer packing" approach used today—a cost-efficient and means of getting this formula out in sufficient quantities to make a real difference for the hungry. FMSC then developed partnerships with major global non-profit humanitarian and missionary groups, which allowed them to reach desperately needy children in remote parts of the world via those with enough in-country expertise to insure that the food packets are safely directed and distributed to where it is most needed. FMSC is justly proud of the fact that in all their years in operation, they have a 99.9% success rate of shipments arriving safely, at their intended destinations.

The organization has grown to six permanent sites—three in Minnesota, two in the Chicago area, one in Tempe, Arizona, and a national MobilePack program that has reached throughout the 48 contiguous states. This growth has made it possible to send over 124 million MannaPacks, sent to 70 countries, by 2010.

The packing sessions are fun, with music adding a beat to our assembly line-type work. The time flies by, and in one night our group packed enough food to feed 33 people for a year.

Feed My Starving Children's program is only possible with volunteer help (there are some age restrictions), and donations. Food prices are expensive, but breaking it down, it only cost $88 to feed one child for a year. For about $10 a month a starving child can be fed. Any donation is immensely appreciated, and 93% goes directly into the feeding program. Each meal, prepared for just .24 cents, can help save a child's life.

We volunteers always come out of these packing sessions feeling like we actually accomplished something positive, that can make a real difference. One woman shared that she was introduced to the work when she acted as an adult-chaperone for a "MannaPack"-packing birthday party her daughter had been invited to. When her daughter and friends went out for pizza after this experience, it was all they could talk about, and the woman was inspired to come back.

It's important, especially in America, where children have so much, to help kids understand the difference between need and want.

At every packing session there are families and teens volunteering—it is refreshing to see, in an age of entitlement mentalities.

When we got home, my little granddaughter acknowledged with gratitude that she is healthy and that she felt so happy to be able to do this small thing for other children who were not.

At bedtime she prayed, "Please God, I hope the food we made for the kids helps them not to have to eat dirt anymore."