The Mighty Macs: More than a Game

October 20, 2011 by Maria Morera Johnson
"Like" the Patheos Catholic Page on Facebook to receive today's best commentary on Catholic issues. 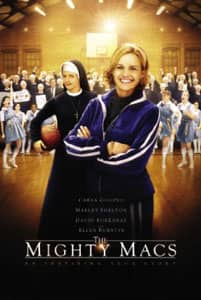 I love basketball and I love nuns.

It's a left over from my Catholic youth, playing ball at Christ the King Elementary School and St. Pius X High School in Atlanta, so imagine my joy to attend a special preview for The Mighty Macs, which opens this weekend.

A movie about women's basketball! With nuns? It got my attention.

And it captured my heart, because it's wonderful.

The game of basketball and the sisters of my youth, taught me valuable lessons about life, faith, and following my dreams, and you might say a box of memories sits in the dark somewhere in my basement, taped shut. It contains a record of my b-ball years, captured on yellowing newsprint and fading ribbons -- team pictures and memorabilia from my glory days.

That box tells a story of sweat, hard work, ambition, and love, a memento mori of sorts -- the end of an era -- the end of a promising basketball career that barely got started. A mysterious problem with my heart, and just like that, it was over. I went from the All-Star Game and Hall-of-Fame stats, to the bleachers.  There were tears and "what ifs" but ultimately, the harsh possibility of early death was. . . persuasive. I put my hoop dreams in a box and pursued new things.

Still, those years of competitive basketball formed me. On those shiny hardwood courts I learned to be a winner, and being a winner requires hard work, sacrifice, a willingness to delay gratification, and heart. It requires giving more than one believes one has; in the importance of teamwork and putting one's desires aside for the greater good.

In a way, basketball prepared me, for my vocation as a wife and mother, and for my second vocation as a teacher. I learned about commitment in those sweaty huddles and time-outs.

But if my dreams of playing in college - of perhaps being an Olympian -- had gone unfulfilled, the true story of The Mighty Macs gave me the opportunity to live the experience of college basketball teamwork, albeit vicariously.  It's a classic Cinderella story that sounds like a cliché: poor Immaculata College, on the brink of bankruptcy, sends an unlikely group of young women to a national championship -- and they win.

We all want to win. Winning makes for good movies.

After the preview I talked with Theresa Shank Grentz -- one of the Immaculata team players chronicled in the film - and Katie Hayak, the actor and former University of Miami (UM) basketball player who plays Trish Sharkey, a character based on Grentz.

Reminiscing about playing basketball back when it was not seemly for young women to be running up and down a court, I asked Hayak how she liked playing in a dress. She delighted me with her laughter. Evidently the blouses were a little restrictive, but she found the skirt freeing as opposed to big baggy shorts and spandex.

What about life after basketball? We both agreed that we didn't quit playing so much as moved on to play new things, but when she auditioned for the role of Trish, Hayak had to demonstrate that she could actually play the game.

The charming Theresa Grentz related that she had no sense of team Immaculata making history at the time. They were simply playing to win, and, in contrast to the film, they were already very much a team. Their group was made up of high school rivals who, finding themselves playing together, shared a common goal. They succeeded, she says, by "checking egos at the door."

According to Grentz, the movie accurately captured the excitement of the nuns and Mother Superior during that season, if not the details. The school really had no money to travel, and the fact that they went speaks volumes for the kind of faith the nuns had in the young women.

Immaculata was not expected to go far in the tournament, Grentz explained, but the nuns had hoped, at least, for a win or two for the sake of the women's self-esteem. As win came after win, one accompanying sister would remain by the gym door, in order to call Mother Superior with the outcome.

Because the team kept moving up in the tournament, they found themselves stranded at the airport with no available seats in coach. A benefactor stepped in and bought first-class seats for the champs.

That's why sports films appeal to us, and why The Mighty Macs succeeds for the genre.

In the end, though, the film is not so much about winning as about how to play the game. Theresa Grentz's favorite scene in the film is when Mother Superior pulls her poker money from the bottom of the statue of Our Lady and says, "Be not afraid."

Indeed. Words to live by.