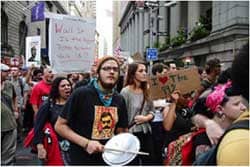 Nine years ago, in 2002, I got on a bus bound for New York City to take part in a protest against the Iraq war. About a year before I had found pacifism, and that transformative experience was, by then, starting to manifest itself in my life in myriad ways. Upon arriving in Manhattan, I walked east from the Port Authority bus terminal and tried to get as close as possible to the UN headquarters, the epicenter of the protests. But the police blocked the growing crowds at Third Avenue, so right there at Thirty-third and Third I joined the Asians for Peace and we chanted and sang and drummed and prayed that the clouds of war that were growing on the horizon wouldn't become a reality.

And we all know how well that worked out.

That's why, last Friday afternoon after I was done teaching for the day, I took the subway to downtown Boston to see Occupy Boston for myself. I exited at the South Station T stop expecting to find a raucous crowd of protesters like I'd seen in footage from New York. I don't know if I imagined that the protest was ongoing, all day and all night, or that musicians and other popular figures were just hanging out, but what I found was a rather subdued tent community, organized neatly around a statue of Mahatma Gandhi. I wandered up down the makeshift "streets" reading signs posted on tents, eavesdropping on conversations, and trying to get a handle on the character of this protest.

I first heard of the Occupy Wall Street Movement last month, a few days before it was set to begin. My friend and sometime editor Nathan Schneider was participating in and covering the event for his website Waging Nonviolence, as well as for other media outlets like Democracy Now. I read his reports hungrily, eager to ascertain the group's intentions and demands. I resonated with their anger and frustration. I understood their complaint, but I still wasn't sure what they intended to do about it. But if anything, I thought, it would be helpful to put a consistent reminder outside of the offices of Wall Street, to let those who work there, most of whom are honest and decent people, know that their greedy actions and those of their colleagues, bosses, and subordinates were having a tremendous and often negative effect on too many working Americans.

Attention to the occupation was slow going at the start. Those few Twitter friends in my feed who knew about it complained about this lack of attention in those early days. But, sure enough, over time the media's attention shifted in their direction and, as Occupy Boston indicates, the idea caught on in other cities.

But, for me, the questions that I had in the beginning still remained. I wasn't sure what the plan was. What were they trying to accomplish? I hoped that by visiting the Boston site for myself, I would have the opportunity to learn.

Some of the people I saw gathered in Dewey Square in Boston fit the stereotype that has been cast on them in the media. I saw dreadlocked college kids, veterans—perhaps war veterans, but definitely protest veterans—playing folk songs, as well as a few less obvious peaceniks. In snippets of conversations I heard oft-repeated refrains, "Because of the media . . ." and ". . . then we'd have all the energy we need!" And I sympathized. I agreed. But I didn't join.

It occurred to me that all the criticism of the movement, both from people like me who are sympathetic to their general cause, as well as from those on the right, is rooted in the sad fact that the protesters are trying to be something that they are not. Take a look or a listen to the consistent criticism. Many point to the fact that the occupiers are inconsistent. There is an image floating around online contrasting the anger they direct at corporations with the plethora of brands that the protesters are wearing and using.

On the other side, the occupiers are accused of not having a clear goal, and thus causing disruption without providing any way to satiate their concerns.

Both of these criticisms stem from the fact that Occupy is a mid-20th-century protest staged in the 21st-century. Sure, it incorporates social media, but aside from that, it is very much an imitation of '60s protests—another piece of nostalgia from a generation that loves to look back almost as much as we like to look inward.

About Jonathan Fitzgerald
Jonathan D. Fitzgerald is the managing editor of Patrolmag.com, and writes on the various manifestations of Christianity in culture. Follow him on Twitter or at his website, www.jonathandfitzgerald.com.