Old and New Witchcraft: A Q and A with Raven Grimassi 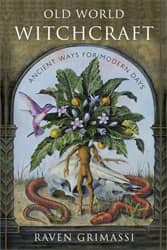 What is the "Old World" in terms of your book?

The use of the term is meant to indicate an old view, an ancestral mindset. While the roots of this are certainly European in a geographical sense, I am focusing more on the "enchanted world view" of Old World paganism.

What is meant by "Old World" witchcraft as opposed to witchcraft in general?

Witchcraft is a word today that evokes different ideas and feelings. When the word appears it immediately causes a person to apply her or his previous views to the topic. By using "Old World Witchcraft" my intent is allow the ideas to form on their own. Old World witchcraft is the presentation of ideas about witchcraft that formed in a time when it was not popularized. Therefore it does not contain New Age perspectives or a collection of eclectic Wiccan views. In this light, Old World witchcraft is more primal and earthy than is typically presented in the common place books on witchcraft today.

What is unique about your book?

I believe that the primary unique element of the book is its presentation of a "spiritual tradition" and a "spiritual lineage" connected to witches and the Plant Kingdom. This involves not only a physical relationship with the traditional plants of witchcraft but also with the spirits that are attached to them. The book is also the first of its kind to rethink the "history" of witchcraft and to seek a balance between the academic and Neo-Pagan understandings.

What is the difference between "Traditional" and "Old World" witchcraft?

Traditional witchcraft is often largely identified as a practice associated with the British Isles. It also contains elements of what I call "imported" elements such as attachments to biblical themes such as Cain, Lilith, and Lucifer. Old World witchcraft is an attempt to present something more rooted in the indigenous pagan elements of Europe prior to influence by other outside cultures.

What inspired you to write this particular book?

The shortest answer is a mystical revelation that culminated through decades of working with the primal connections within older forms of witchcraft. It seemed to me that the writings on witchcraft to date were bringing nothing fresh, and that books on the topic were simply rehashing what we've read over and over again. This inspired me to write about things that are rarely if ever put into publication. In private conversations people kept asking me why I didn't write about what was taught privately. This reached critical mass, and so the material itself insisted on getting out there in the public arena.

What is the difference between modern witchcraft and older forms of witchcraft?

I believe that modern witchcraft is a blend of different cultural ideas along with magical systems from diverse places in the world. It seems to me to be more about the enjoyment of the fruit it produces than about nurturing the roots that sustain it. I see the "Old Craft" as a great tree. Its roots are its connection to the foundational elements known to our ancestors in true and deep ways. The blossoms on the old tree are the modern understandings and systems. While this is important for the production of new seeds, if no one cares for the well-being of the roots, then the entire tree perishes. Old World witchcraft is not all about casting spells and being witchy. It is about embracing the spiritual-mindedness of those who came before us, and then applying that to the needs of our modern lives.

Is witchcraft a magical system or a religion/spiritual path?

This is the great bone of contention. In modern times many people believe that witchcraft is simply a magical system with no association to religion or spirituality. However, when examining ancient writings there are certainly religious elements. One example is the ancient depiction of the witch Medea, who performs her witchcraft at an altar and calls upon a variety of deities. She is also depicted as a priestess of the goddess Hecate. In the writings of the ancient Roman poet Horace, witches call upon Diana during their rituals. Ultimately, practitioners of witchcraft will self define, but the spiritual lineage is there to draw upon for those who relate to something more than the casting of spells.

How can ancient methods remain viable in modern times?

While it is true that there is as much ancient folly as there is ancient wisdom, we do continue to use the practical time-proven methods of ancestors in everyday life. On a mundane level they passed on to us not only methods of construction, survival skills, and the invention of the wheel, but also their understanding of magic and otherworld connections. An important part of ancestral wisdom is the idea of a firm foundation. We can build what we want and it will stand as long as the foundation is sound and strong. The "Old Ways" are that foundation, and so they remain viable even in an eclectic age.