Sign and Symbol: The Cross Over Germany and on Our Hearts

October 11, 2011 by Kathy Schiffer
"Like" the Patheos Catholic Page on Facebook to receive today's best commentary on Catholic issues.
"I crossed Germany from north to south, from east to west."
--Pope Benedict XVI, speaking about
his apostolic visit to his homeland 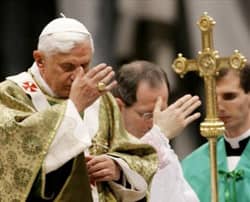 In his General Audience on Wednesday, September 28, Pope Benedict reflected on his recent apostolic journey to his native Germany. He reminded the faithful gathered in St. Peter's Square of the theme of his visit: "Where God is, there is a future." He commented on groups with whom he'd met: the German Parliament, the Council of the Evangelical Church, the young people.

He said with a smile, "I crossed Germany from north to south, from east to west."

And indeed he had. Our Holy Father, traveling by air from Berlin to Erfurt, from Eichsfeld to Freiburg, had drawn the Sign of the Cross over his homeland. Amid the flurry of state visits, papal processions and encounters with abuse victims, the Pope had thoughtfully overlaid this symbol of grace and faith.

The imagery of Pope Benedict's large-scale aerial blessing was largely overlooked, as news reports focused instead on his messages to Jewish rabbis, Muslim leaders, and victims of clergy sexual abuse. It was the Pope himself who called attention to this significant detail in the planning.

The Sign of the Cross—drawn with the Pope's hand and with his airplane—had marked Germany for Jesus.

We Catholics are a people rich in sign and symbol; and with the Sign of the Cross, we call the Triune God to be with us—as we rise to face the day, as we enjoy the generous repast He has provided, as we enter His house. At Baptism and Confirmation, at Holy Orders and in the Anointing of the Sick, with water or with sacred chrism or with the oil of the sick, the Sign of the Cross is applied.

Popular Catholic author/speaker and convert to the Catholic faith Bert Ghezzi has told how, as an evangelical Christian, he was captured by the rich symbolism of the Sign of the Cross—with the result that it had eventually played a part in his conversion. Ghezzi wrote an entire book on the subject, aptly titled The Sign of the Cross: Recovering the Power of the Ancient Prayer. In his book, Ghezzi explains six meanings of the Sign of the Cross: It is a confession of faith; a renewal of baptism; a mark of discipleship; an acceptance of suffering; a defense against the devil; and a victory over self-indulgence.

From the early days of the Church, the Sign of the Cross has been our proud symbol of Christ's victory and our fidelity.

The Catechism of the Catholic Church (paragraph 2157) says: "The Christian begins his day, his prayers and his activities with the Sign of the Cross: 'in the name of the Father and of the Son and of the Holy Spirit. Amen.' The baptized person dedicates the day to the glory of God and calls on the Savior's grace which lets him act in the Spirit as a child of the Father. The sign of the cross strengthens us in temptations and difficulties."