October 20, 2011 by Joseph Susanka
"Like" the Patheos Catholic Page on Facebook to receive today's best commentary on Catholic issues.

Theology, philosophy and science all speak of a harmonious universe, of a "cosmos" endowed with its own integrity, its own internal, dynamic balance. This order must be respected. The human race is called to explore this order, to examine it with due care and to make use of it while safeguarding its integrity.
—Blessed Pope John Paul II 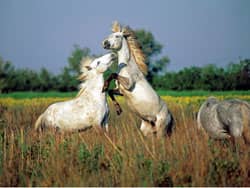 On a practical level, the polarization of American politics makes a lot of sense.

By focusing on a handful of hot-button issues, it is much easier for proponents/opponents (of anything) to attack and defend a single view than to develop clear, reasoned responses to a myriad of positions. Nuance is nice enough in the abstract, but if one finds oneself compelled to address the many sides of a particular topic, the Rose of Subtlety loses quite a bit of its bloom. It's just not very practical.

Sadly, once nuance is lost, dyed-in-the-wool fence sitters like me find themselves with nary a fence to sit upon. I hold a position on immigration that is neither "Send 'em all packin' and put up that wall!" nor "They're here, now, and laws are mostly meant as suggestions, anyway", but such in-between thinking is no longer considered expedient by the Pronouncing Political Powers and Media Mavens who reduce serious questions—on the legality and effectiveness of the death penalty; on the moral foundation and repercussions of the Iraqi/Afghani invasions; on our obligations in the face of such frightening economic times—to a pair of extremes.

"Option A vs. Option B," we've got aplenty; of multiple choices we are fresh out. Woe betides he who picks something in the middle; both will spew him out of their mouths for being all-too grey for their black and white world.

A recent viewing of Albert Lamorisse's White Mane (Crin-Blanc, Cheval Sauvage)—at the recommendation of a faithful "Lens" reader—reminded me of one of the most personally frustrating of these hot button issues: conservationism and its many moral and practical considerations. Mulling over my publically-acceptable options, I find the notion that humanity is little more than an unnecessary blight on the face of the Earth only slightly more appalling than the suggestion that Genesis gives us license to do whatever we bloody well please with God's Creation.

Winner of the Grand Prize at the Cannes Film Festival a mere three years before Lamorisse's Oscar-awarded The Red Balloon took home that same honor, White Mane is a lyrical, visually striking homage to the films of the Silent Era. Using little more than music and imagery—there is a line or two of dialogue and a sparse sprinkling of voice-over narration—the 40-minute short tells the story of White Mane, unquestioned leader of a herd of wild horses roaming through the marshlands of Camargue, France. A group of local herdsmen have vowed to capture and subdue the film's eponymous steed—they have "determined to find White Mane to prove to him that men are always the strongest," as the narrator says—but despite successfully corralling the stallion a number of times, their efforts at subjugation have proven spectacularly unsuccessful.

Folco, a young boy who earns his living fishing on Camargue's labyrinthine marshes, watches the cowboys and their stubborn victim from a distance, fascinated by the horse's resistance to the battle-tested methods of his captors. Drawn to the fiercely beautiful animal, Folco is overjoyed to hear the foreman's exasperated cry: "That dirty beast! Whoever wants him can have him!" Galvanized into action by these words, the young fisherman sets out on the nearly impossible task of making White Mane his own. His approach, however, is strikingly different than that of his elder adversaries. As one whose very existence depends on an awareness and sensitivity to his natural surroundings—nature puts food on his grandfather's table, playthings in his baby brother's hands, and dreams in his own tousled blond head—Folco is determined to befriend White Mane rather than frighten him into obedience. But the cowboys' relentless efforts to "prove than men are always the strongest" threaten to undermine the young boy's attempts to find "that wonderful place where men and horses are friends, always."