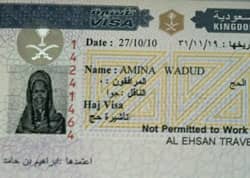 In 2010, Amina Wadud, a noted author and scholar on Islam and gender, traveled to Makkah and Madinah to perform her first Hajj and celebrate Eid ul-Adha. Wadud kept an extraordinary blog about Hajj experiences. Patheos is combining her blog posts into three essays covering her preparation, her actual Hajj, and coming home. In part one, Wadud talks about her niyyat (intention), making amends with loved ones, wrestling with details, and dealing with changes in her plans.

The year President Sadat was killed I lived in Cairo. That was 1981. Egypt is just across the water from the Saudi Arabian peninsula so it occurred to me it would be a very easy to make hajj from there. I bought an airline ticket and was in contact with the family of one of my graduate school friends. They would pick me up from the airport and host me during my stay and the days of ritual. Nice plan.

So I went to the embassy to get the visa and was denied because (as an American) I needed proof that I was Muslim. How do I prove I have been a practicing Muslim for a decade? I went to the famous al-Azhar university and secured a shahadah document in French, Arabic and English. I returned to the embassy and was told one has to be Muslim for at least six months to make hajj. So I go to the American embassy and secure an affidavit stating I have been practicing Islam since 1972.

When I brought that to the embassy they said: you need to have a mahram, the male guardian. At the time I was divorced and my son, Muhammad was only six years old, living with his dad while I was away. My father was deceased and all the other living males in my family were not Muslim. There was no office I could do to secure what was demanded of me, so the day for my flight came and went and the ticket never got used.

During that year, a woman read my tea leaves after supper with some of my new friends. If you don't know how that works, first I drank a cup of tea with leaves still settled at the bottom. Once the liquid is mostly all drunk, the reader takes the leaves, swishes them around in the bottom of the cup, turns the cup upside down and "reads" the tracks and pattern stains left by the leaves. I remember only one thing she said, that I would make hajj in the next year or two.

This year I made my intentions during the previous hajj season. As I have said, I committed to use my little bit of savings to pay for this once in a lifetime trip and then my sister dies suddenly leaving me the beneficiary of her life insurance policies. The cost for the trip was secured and as the year wore on I simply waited for my return to the US to begin my hunt for a travel agency to handle the details.

My first question was about the visa. Having been stalled at the embassy when I tried to make hajj almost three decades ago, I must admit, I was nervous. Unfortunately the tour company has never allayed my fears. They never really came forward with any information or with any response to direct questions. So I have stayed nervous. I knew that from the US there are no quotas, and that what had been a factor -no matter what technicalities were used from the embassy in Cairo-the real matter was that Egypt is not only very conveniently located vis-à-vis the Arabian Peninsula, it is also a very highly populated Muslim country and too many people request visas for hajj. Like Indonesia, one has to plan two or three years in advance. No walking up to the embassy three weeks before.

So, mostly I was nervous because of the failed experience before-I know what it is like to be denied. But honestly that is only part of the problem. In 2005, I was invited to lead a Friday jumu'ah prayer consisting of a mixed gender congregation in a public religious space. I have not lingered over this event here and maybe never will. For one thing, it was hotly contested. In order for me to downplay the sensationalism, I choose mostly not to dwell on it. Anyway, I certainly never wish to play into the hands of sensationalism; it is my hope that one day we will normalize women and men praying side by side, as they do in Makkah, and we will see women and men equally as prayer leaders. Until that time, it continues to be an event.

Only two official fatwas were given against the women-led prayer and one of them was from Saudi Arabia. At the time I asked some colleagues whether they thought the fatwa would be a problem if I sought to secure a visa to perform my hajj and they said, "It might." One of those whom I asked was the late Dr. Nasr aAbu-Zayd, who also offered this consolation: "People have a short memory, it will blow over."