November 22, 2011 by Pat McNamara
"Like" the Patheos Catholic Page on Facebook to receive today's best commentary on Catholic issues. 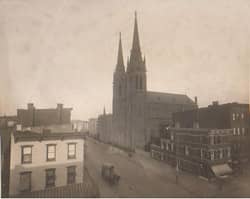 New York City is always reinventing itself. Nowhere is this truer than in Brooklyn's Williamsburg section, now a haven for the young and trendy. Over the years, the neighborhood has been home to many groups: Hispanic, Jewish, Italian, Polish, and many more. For most of the 1800s, German immigrants were the largest group, and their story is worth retelling.

At the center of "Little Germany," on the corner of Montrose and Graham Avenues, stood Most Holy Trinity Church, where author Betty Smith was baptized Elisabeth Wehner. In A Tree Grows in Brooklyn, her protagonist Francie Nolan calls it

. . . the most beautiful church in Brooklyn. It was made of old gray stone and had twin spires that rose cleanly into the sky, high above the tallest tenements. Inside, the high vaulted ceilings, narrow deepset stained-glass windows and elaborately carved altars made it a miniature cathedral.

Stone was imported from Wurzburg, stained glass windows from Innsbruck, and people from Bavaria and Hesse. Together they created the church known as "the German Cathedral."

The parish's story begins in 1830s Manhattan. The Lower East Side was a bustling German community concentrated in crowded tenements. St. Nicholas Church on East Second Street, the city's first German Catholic parish, had 11,000 parishioners. Many missed the open country and fresh air of home. Williamsburg, a largely unsettled area across the river with affordable housing, seemed a pleasant alternative to tenement life.

In the summer of 1841, Father Johann Raffeiner (1785-1861), a priest stationed at St. Nicholas, purchased property there. Ordained at 40, he had been a soldier and a successful surgeon, and paid for the purchase from his own pocket. In October, the Church of the Most Holy Trinity opened, and Raffeiner became pastor. He slept in the basement, which doubled as a schoolhouse. At the time, one parishioner recalled, there wasn't a single house within sight of the new church.

Seventy families, all German, composed the congregation. They recreated a German village in urban America. One Brooklyn historian writes: "the singing societies and the Turnvereins [gymnasiums] and dance halls and beer gardens . . . helped make life pleasant in the good old German way." For more than three generations, language and culture remained German. "Language preserves the faith," was a popular saying among them.

In 1843, a German priest serving in the parish described a typical Sunday as "work all day": morning confessions, Mass, afternoon catechism, evening prayers, and "pastoral conversation." One could reasonably hope, he suggested, for a congregation of "more than one thousand souls." When Father Raffeiner died in 1861, there were over 9,000.

Not everyone welcomed them, however. Protestants calling themselves "Native Americans" joined a group, about which they pledged to reveal nothing. Nothing but its deep hatred of Catholics. (They were called "Know-Nothings.") When Bill "the Butcher" Poole's* gang tried to burn local Catholic churches, Father Raffeiner stationed armed men around the parish grounds:

In these stirring times the martial spirit of the old soldier-pastor of Holy Trinity came back to inspire his devoted flock to take measures to ensure the safety of their lives and property.

In August 1853, four Sisters of St. Dominic from Bavaria stepped off the ship Germania in New York harbor. Their goal was Pennsylvania, but their escort never arrived. Father persuaded them to help him in Williamsburg. They were much needed.

That fall, the Dominican Sisters started teaching at the parish school (in German). Soon there were 1,500 students, whose parents paid fifteen cents a week. By the time of the parish's 75th anniversary in 1916, it was estimated that some 150 young women joined the Dominicans. (Until the early 1900s, the community's official correspondence was in German.)