Most Holy Trinity expanded impressively. By 1880, it had a hospital, orphanage, home for seniors, even a daily newspaper (in German). There was also a group for Civil War veterans, a dramatic Society, a young men's club, and a parish library. The St. Joseph's Society provided for sick members and their families. On holy days, the Union Guard marched through the neighborhood while hymns like "Maria Meine Koenegin" ("Mary, My Queen") were sung. Long before the term "megachurch" was coined, Brooklyn's German Catholics lived it.

After Father Raffeiner, most priests in the parish were native sons. For three decades there was always a Father Hanselman in the parish, sometime two; in their family of eight, five became priests and two nuns. One pastor, Father Frederick Schneider, was actually raised in the parish orphanage. Many local vocations served other German parishes in the area.

By the time Betty Smith left Brooklyn, the neighborhood became less exclusively German with the arrival of Italian, Hispanic, Polish, and Jewish residents, and Most Holy Trinity ceased to be exclusively German. Many old families moved to Queens and Long Island. By 1940, English was the parish's main language, and the 1941 centennial featured "Old Timer's Night."

A parish's story involves more than just a building. It's about all the people who built and sustained it. It's about the hardships they endured to build a faith community, how they preserved that faith and handed it on to a new generation.

Today, a new generation of immigrants does the same in Williamsburg, Brooklyn. And trees still grow there. 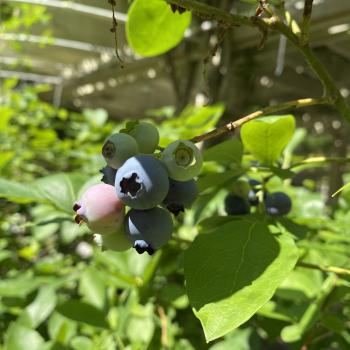 On Jinn and Devils: Are They Always Evil?
Bader Saab
4

6 Things Good Dads Do: Here's Number 3...
Roland Warren
Get Patheos Newsletters
Get the latest from Patheos by signing up for our newsletters. Try our 3 most popular, or select from our huge collection of unique and thought-provoking newsletters.
From time to time you will also receive Special Offers from our partners that help us make this content free for you. You can opt out of these offers at any time.
see our full list of newsletters
Editor's picks See all columnists