Between the Crucifix and the Pews 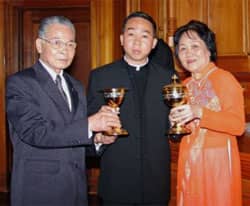 We often say that God writes straight with crooked lines. Few stories could be more crooked, or surprising, than what God wrote with the life of a boy named Martino BaThong Nguyen.

He is Vietnamese. His parents worked for the U.S. government in Saigon in the 1970s. Because of their connection to the U.S., when Saigon fell, his parents were declared enemies of the state, and sent to separate prisons—even though, at the time, Martino's mother was pregnant. She endured months of beatings and near-starvation before finally being released. Shortly after she was freed she went into labor, and gave birth to Martino on the streets of Saigon.

With his father still in prison, young Martino and his mother were sent to a Catholic refugee camp near the Cambodian border. They could pray in private. But to attend Mass, they had to walk miles, often stopping overnight to sleep. They would sometimes arrive at the church - which was little more than a shack—to find a note on the door saying that Mass had been canceled because the priest was in jail.

And so it went, for years. It would be another 10 years before Martino's father was finally freed from prison and reunited with his family.

When Martino was a teenager, he began teaching catechism to other refugee children. Four different times he was imprisoned for doing that—each time, kept in a cell smaller than a shower stall. He was regularly taken out and beaten because he would not deny his faith in God.

Finally, in 1993, the family qualified for a repatriation program, and was allowed to emigrate to the United States. When they arrived in Chicago, they spoke very little English and had just $49. Martino's parents worked multiple jobs to support themselves and enable their son to go to college. During college, he landed a job with Blue Cross/Blue Shield, where he in time he became an investment broker. Shortly after graduation, he decided to take a month off. He used that time to do something radical: he went to India to volunteer for Mother Teresa and the Missionaries of Charity.

His first day, one of the sisters handed him a bar of soap, a razor and a towel, and told him to shave one of the men in the hospice. "But I'm an accountant," he told her, "not a barber." She kicked him out. Not long after, there he was, sitting on the floor, cradling the dying man's head in his lap. He shaved him, cleaned him, bathed him. After he finished, the man opened his eyes, and nodded. Moments later, he died.

From that moment, Martino knew what he had to do—something he first thought about when he stood outside that shack in Vietnam and read that there would be no Mass because there was no priest.

It was something that had haunted him for years.

So, after a month in Calcutta, Martino returned to America, and entered the seminary.

Today, he is Fr. Martino BaThong Nguyen. He was ordained in 2004 for the Diocese of Savannah in Georgia—a region where only 3% of the people are Catholic. Fr. Martino chose Savannah because he wanted to be a missionary.

And he is. Among other things, he is the chaplain for the Serra Club of Savannah, and he spends a lot of time telling the story you just heard.

This Sunday, World Priest Day, I wanted you to hear it—because it reminds us that the seeds of a vocation are often sown in unexpected ways, and in unexpected places. And the fruits can yield amazing grace.

That includes the grace to listen, and to hear, when God calls. The priesthood is, first and foremost, a calling. But it is also, in its way, an act of heroism. It is saying "Yes" to God in a world that increasingly says "No." And in saying that "Yes," the priest spends his life reminding the world of something it so easily forgets: that is, the presence of God - most importantly, the Real Presence, through the Eucharist.

There is a moment in the ordination rite when the men being ordained lie face down, prostrate on the floor of the church. In an interview a few years ago, Fr. Martino remembered it vividly: in front of him was the crucifix above the altar; at his feet behind him were hundreds of people in the pews, including his parents.

And he realized, with a blinding clarity: between the crucifix and the pews there was a bridge.

"The priest lays down his life for the people," he said. "I am the bridge. The people cross over me to get to God."

This morning, we honor the bridges in our own lives: the priests of our parish. We may not always realize it. We may even take it for granted. But we need to acknowledge: they have laid down their lives for us. They have served to bring us to God, and to bring God to us—at baptisms, at weddings, through confession, through anointing. And, of course, through that most precious gift, the Eucharist.