From my childhood Catholic days I recall having serious doubts not long after Confirmation, the rite of passage that is supposed to confirm you as part of the one and only Church. It was that rigid exclusivity that bothered me the most. In the modern world it seemed ridiculous that all the good people out there who'd heard of Catholicism, but preferred another path, were bound to an eternity in Hell. So I decided for myself that the Church was just mistaken on that point. And it wasn't long before I began quite a long list of "mistakes" the church leaders must have made.

Like nearly a majority of Catholics in the United States, I rejected the strict Catholic view on Vatican authority, birth control, same-sex relationships, marriage, and divorce. Where I grew up in the suburbs north of New York City, there wasn't much pressure in our mostly Catholic town to follow any of these dictates too seriously. So the Catholic hierarchy's relative lack of drum beat on these issues back then seemed to be a rather smart move—it kept congregants from feeling hemmed-in by outdated ideas.

In recent years the Catholic Church lost many of its members to other religions and to the even more popular option: none of the above. Of course, a big part of this was sparked by the epidemic of priests being exposed for committing child rape, and accelerated by the subsequent criminal cover-up by the Church that hid dangerous criminals and denied the victims justice. The fall of the Church's moral authority as this scandal continues to unfold is causing many to flee for safer waters, but it should be acknowledged that this is not the only factor that led to a downturn in membership.

Some, such as New York Archbishop Timothy Dolan, accuse atheists and secularists for this breakdown due to their "aggressive secularism." Another church official, Bishop Lori of Connecticut, believes that secular Americans and their representatives in our government treat religion "not as a contributor to our nation's common morality but rather as a divisive and disruptive force better kept out of public life."

The Church's lack of understanding of their membership loss truly shows how detached from society the institution has become. These officials mistake opposition by Americans to discriminatory and exclusionary religions as part of some broader vendetta against religion and spirituality itself. The issue truly at hand is that the Church's history of opposition to LGBT equality, science, and women's rights contradicts the increasing diversity and tolerance that characterizes the modern age. People all across the world are more connected due to advances in technology, and with that interconnectivity comes the understanding of different cultures, ethnicities, and belief systems. No longer are we afraid of "the other"; we now merely wish to understand who they are, where they came from, and how we can work together for the betterment of all.

If the Catholic Church wants to stem the tide of departing members they should recognize what Alex de Tocqueville saw 150 years ago: community and good will are more important to many Americans than specific dogma. The Church still does good in society, and if it merely focused on ensuring that human beings were treated with dignity and respect they would be more admired. Instead of that positive approach, the Church under Pope Benedict XVI has been telling AIDS-ridden Africa that use of condoms is immoral and that they are ineffective in preventing infection. The church also has cemented its position as a force against women's rights, even excommunicating a nun who allowed a medically necessary abortion to occur at her Catholic hospital. What does the church gain from such extreme actions besides a reputation for placing allegiance to an ancient text over human life today?

Rather than focusing on dividing us along scriptural grounds, the Church should instead work on uniting humanity to solve the collective problems that weaken us all. Catholics around the world give readily to charities and work to strengthen their local communities just like Jews, Muslims, Hindus, Buddhists, and atheists do. If the Church harnessed that compassion instead of promoting a divisive and hurtful agenda, the world would become a much better place and the Church would have a chance of regaining respect and followers. 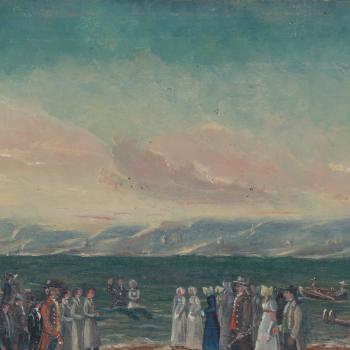 Creationism failed, again, in Arkansas. But don’t fist-bump just yet.
Rick Snedeker
Get Patheos Newsletters
Get the latest from Patheos by signing up for our newsletters. Try our 3 most popular, or select from our huge collection of unique and thought-provoking newsletters.
From time to time you will also receive Special Offers from our partners that help us make this content free for you. You can opt out of these offers at any time.
see our full list of newsletters
Editor's picks See all columnists