November 18, 2011 by Matt Emerson
"Like" the Patheos Catholic Page on Facebook to receive today's best commentary on Catholic issues. 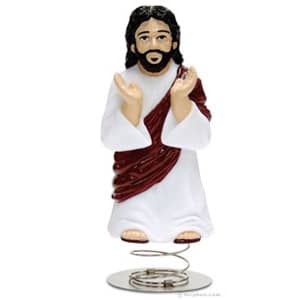 Better minds than mine have extolled the greatness of "Catholicism: A Journey to the Heart of the Faith," the ten-DVD series masterminded by Chicago priest and Word on Fire founder Father Robert Barron. Given the abundant commentary (and certain I lacked new words to reiterate fresh praise) I had no intention of offering more.

But a review of "Catholicism" by America's Maurice Timothy Reidy, well-intentioned though it may be, calls for critique. It also indirectly raises threshold questions for the future of Catholic publishing and media.

To be fair, where Reidy finds it merited, he is candid with praise. He declares the series "nearly flawless" from a "production standpoint," citing Father Barron's visits to sites like the Pantheon, St. John Lateran of Rome, and Lourdes. Moreover, says Reidy, "[a]t a time when the church sometimes seems as polarized as the political culture, 'Catholicism' is an essential reminder that we are all brothers and sisters in Christ." Reidy writes that Father Barron's "discussion of the Eucharist is especially affecting" and the "soul-searing images of Catholic art and architecture might even prompt some viewers to consider conversion . . ."

All very nice, but Reidy finds plenty to fault.

Father Barron's portrait of Catholicism is, he says, "a bit old-fashioned." After "10 hours of stained glass windows and Gregorian chant," Reidy yearns "for kitsch church mosaics and the strains of St. Louis Jesuits." While one detects some humor behind those lines, what Reidy writes next is not meant to be funny: "[T]he film fails to convey that the church is a living tradition, one that continues to inspire artists, musicians and writers, as well as young theologians and lay ministers. Shots of worshipers in Mexico and the Philippines are not enough to capture the vitality of the church today."

That last sentence is almost self-refuting and ought to incentivize everyone to watch the series for themselves. The pilgrims in adoration before the shrine of Our Lady of Guadalupe; the thousands crowding John Paul II at the first World Youth Day in Manila; the exuberant cries in St. Peter's Square greeting the new Pope Benedict XVI; the vibrant, colorful liturgies in Uganda: these and more were dramatic vignettes of not only the vitality of today's church but, equally, its universality.

And what, I wonder, would better convey a living tradition? Kitsch church mosaics? If that's the tradition we're preserving, to hell with it. More to the point: we could all, perhaps, propose less famous and more contemporary Catholics as models of the stamina and creativity of our faith (Ron Hansen, author of excellent novels like Atticus and Mariette in Ecstasy comes to mind, as does Father James Martin, S.J.), but with limited time and non-Catholic, sitcom-level attention spans to entice, Father Barron turned to the heavy hitters. What young theologian or lay minister is a more compelling representative of Catholicism, or of conversion, than Dorothy Day or Thomas Merton?

Echoing other reviews, Reidy questions the documentary's Eurocentricity: "The cathedrals of Europe are awe-inspiring, but they can seem far removed from the reality of parish worship today." Thank God. Putting aside whether modern parish worship is fairly included in a series presenting the "heart of the faith", for many Catholics (especially those under 30) parish worship is the only Catholicism they know, if that. While I do not want to marginalize the heroic work that I've seen in today's parishes, modern parish worship can be bland and uninspiring, even detrimental to the religious impulse. The world needs to be reminded of the majestic images and heartbreaking detail, in stone and on canvas, born of a great faith.

I see the power of this documentary in the reaction of my students. I'm not halfway through the series with a group of seniors and already they are more captivated by "Catholicism" than probably anything I've ever shown or taught, whether book, article, or movie. One student walked into class the other day and said, "Mr. Emerson, I love this movie." To be with these students as Father Barron speaks in San Chapelle or as he explains the Beatitudes in the shadow of Grünewald's Isenheim Altarpiece is as remarkable a moment as anything I've experienced as a teacher. To be sure, they aren't necessarily understanding it all; they aren't necessarily rushing to be baptized or ordained: but they are, more than ever, hooked. The images, the cathedrals, Father Barron's refusal to make Christ the buddy on the dashboard: this is speaking to a culture hungry for truth and for something worth fighting for.