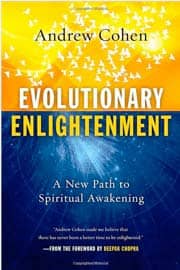 Andrew Cohen, founder of EnlightenNext, is redefining the spiritual ideal of enlightenment for the 21st century. Through his revolutionary philosophy, his award-winning magazine EnlightenNext, and his work with thousands of individuals and groups around the world, he is dedicated to creating nothing less than a revolution in consciousness and culture. He and Leo Brunnick, founder of Patheos, shared a conversation about Cohen's new book, Evolutionary Enlightenment: A New Path to Spiritual Awakening.

What is Evolutionary Enlightenment?

Evolutionary Enlightenment is the marriage of the traditional mystical experience of the higher state of consciousness known as enlightenment with our emerging scientific understanding of what it means to be part of an evolutionary process that had a beginning in time 14 billion years ago.

So expand a little bit on how that's different from traditional—or eastern—views of enlightenment?

Well, the eastern notion of enlightenment emphasizes a notion of transcendence, and it is based upon the awakening to the deepest parts of the self. We access this enlightenment through meditation, which typically works through releasing our identification with the content of consciousness. When we release and let go of our identification with thought and memory, as that falls away from the center of awareness, we lose our awareness of time.

If we continue this process, eventually we lose track of the mind, we lose track of time; time disappears, the world disappears, and we eventually even lose awareness of our own physical form. The traditional liberating discovery of the great mystics—from all the great traditions but especially the mystics from the east—is that when the mind, time, world, and form disappear, including our memory of any events that ever happened in time, the essence of who I am and who we all are is still there.

So when the mind, time, and world disappear, I realize that I still exist and I discover myself to be formless beginning. I realize an endless discovery of my immortal nature, called the unborn or the uncreated. So the traditional notion of enlightenment is based upon the experience or discovery of the deepest part of the self that's never been born within the stream of time.

That would be a little synopsis of traditional enlightenment, but in what I call the Evolutionary Enlightenment, we are pointing to a different manifestation and expression of the absolute. In Evolutionary Enlightenment, all of manifestation is being driven or compelled by the energy and intelligence of the creative process, the Eros, a dynamic, energetic, developmental process. We interpret that as a creative aspiration that emerged from emptiness and created the uniquely human compulsion to innovate and give rise to that which is new. The human experience of that creative compulsion is the ecstatic urgency that gave rise to the material universe.

So, the form and expression of enlightenment is a kind of a deep surrender to and a conscious engagement with the creative process to give rise to that which doesn't yet exist. It's a very active and deeply engaged expression of spiritual freedom and yet deliberate engagement with the process. And just as in traditional enlightenment, in order to be able to transcend the mind and transcend time and transcend forms so that we can experience the unborn and the uncreated timeless, formless death, eventually we have to let go of the fears and desires of the physiological self.

About Leo Brunnick
Leo Brunnick is a founder and the CEO of Patheos.com. He is helping shape the vision, mission, strategy and operating principles of the company and its lines of business. In this role, he brings to bear 20 years of intense executive leadership and management experience. Not only is he an expert in bringing cutting edge web technologies to market, he is the visionary behind our innovative approach to our libraries and lenses and has a deep passion for the global conversation on important religious and spiritual matters.