For Freedom, Christ Set Us Free

November 15, 2011 by Tim Muldoon
"Like" the Patheos Catholic Page on Facebook to receive today's best commentary on Catholic issues. 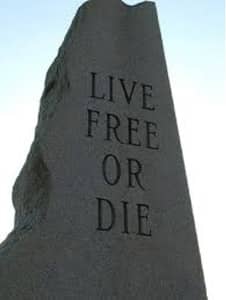 Abortion. Same-sex marriage. Legal suicide. Taxation. Religious freedom. War. Pornography. Take a look around the headlines over recent months and you'll see that the pressing moral and political issues are all rooted in the way we understand freedom. It's a shame that most of us have absolutely no idea what it is.

I'm reminded of the words that Judge Potter Stewart used to describe pornography: he declined to try to define it, but stated "I know it when I see it."  We seem to have a similar attitude toward freedom, but in the negative sense: we know it when we don't see it. And when we see other people telling us what to do, we don't see freedom. So when we see a religious tradition telling us not to do something, we love the idea of running the other way. Live free or die! (apologies to my neighbors in New Hampshire.)

This is no way to be free, of course, unless you happen to be about 16 and are confident of your ability to see the whole of reality. Or, unless you are an existentialist.

This past week, I, along with a number of colleagues, debated responses to Existentialism is a Humanism (1946), a summary of the work of the French philosopher Jean-Paul Sartre. It's not a particularly good argument, but in his defense it's a very short summary, a speech he gave in less-than-ideal circumstances, based on his much more developed philosophical work Being and Nothingness (1943). These works both arise out of the horrors of wartime France and the destructive capacities embedded in the civilization of the West. It is little surprise that Sartre's assessment of that cultural project, following predecessors like Nietzsche and Marx, was that the Church strangled people by offering a crude, deterministic view of life: you must obey God's rules, suffer and die, and then go live with him.

Sartre's response was that there was, of course, no God, and that human beings were free and had to wake up to experience the anguish that accompanies such a realization. Untethered by the rope of doctrine or morality, and unfettered by illusions that there is a "human nature," he wrote, the human being is free. Free! Free thinking, free acting, free to make him-self. He can blame no one for what he becomes, whether a coward or a hero (and these no small matters in wartime France).

Sartre was smart, and on some level he was also part of an august group of philosophers who saw themselves as changing the world by changing their philosophy. Socrates, the Stoics, the Neoplatonists, the monks, the Reformers, Marx, and others believed that real wisdom ought to be about practical change in the world.

Yet Sartre was also vicious, living a life of celebrity while also engaging in decades of sexual predations and sometimes making incendiary comments about violence. Sartre's freedom was about negating a God he didn't like (without much justification) and following that free act to its miserable absurd conclusions. To be sure, he strove for consistency: if he was diving off a philosophical cliff, he wanted to explain what would happen at the bottom.

But Sartre's view of freedom missed something incredibly important, and so liberal and conservative embraces of that view of freedom also miss something. What they miss is that there are conditions that make that kind of freedom possible in the first place, and it is those conditions-not acting on one's own initiative-which make one free.

What I mean is this. If left untutored, human desire is at root mammalian desire. We desire nourishment and pleasure and will, if given sufficient opportunity, seek both until we die. We become caged by desire, as Sartre himself was in his personal life, never really able to love another person. For Sartre, existential freedom was like that of an artist who could do anything; but what he missed is that an artist must be tutored by those who can give him an artistic toolkit in order to grow. Yes, the artist can always say "I am free; I will not listen to you!", but in doing so he undercuts the very dynamic by which his artistic energies will be set free. So too with life: acting on one's initiative is not enough, because by my own initiative I might be sawing off a branch on which I am sitting. I must learn to use my initiative well, and that means choosing to discipline it, to sit at the feet of those who know more.