Ellen is a medical student, and thinks of herself as a rational person who doesn't go in for mystical experiences. But one day, as she closed her eyes and relaxed in Savasana, Ellen felt a powerful, maternal energy around her and "saw" the Indian goddess Durga, whose picture graced the yoga studio's back wall. For a moment, the eight-armed goddess's face lingered in front of her, looking alive and full of compassionate love. Then the image disappeared—though the sweet, strong energy stuck around for hours.

Months later, at a meditation workshop, she asked me what I thought her experience meant. After learning that she'd been experiencing the usual pressures of medical school, I said that maybe the Great Mother was offering a bit of support.

When Ellen looked at me blankly, I suggested she try to access the energy again. "No preconceptions, just sit in meditation and ask the Durga energy to be with you. Then notice how you feel." Sounding extremely tentative, Ellen asked me what she should expect. I resisted the temptation to say something gnomic, like, "Don't expect anything," and told her "You'll probably feel some empowering and benign energy—energy that can open you up to a deeper source of strength."

The practice I suggested to Ellen is called deity yoga, and it isn't specific to the Hindu tradition. Christians do a similar practice, invoking Christ or Mary or other saints. Buddhists invoke different forms of Buddha.

In the yogic traditions, the Goddess is considered the embodiment of power and of energy—the energy that enlivens the world, and our own bodies and minds. Whether we encounter the Goddess spontaneously, as Ellen did, or explore her deliberately, as a practice, the energy can open us to our own inner source of empowerment.

Energy Fields
The yogic sages—especially in the branch of yoga called Tantra—anticipated quantum physics by pointing out that a subtle vibratory energy is the substratum of everything we know. Unlike physicists, however, yogic seers experienced this energy not simply as an abstract vibration, but as the expression of the divine feminine power, called Shakti. Reality, the tradition says, is Shakti's dance, which takes form as our body, our thoughts, our perceptions, and also as the physical world.

The Hindu traditions are famously comfortable with the idea that the Absolute Reality, while formless, is perfectly capable of manifesting in divine forms. So Shakti, the formless source of everything, is understood to take forms—as goddesses, personifications of the different energies that make up the world and our own consciousness.

Whether we actually "believe" in goddesses, contemplating them allows us to become intimate with the vast impersonal forces of the universe.

Of Gods and Men
Jung and his followers looked at the Greek gods as archetypes of universal psychological energies. The Hindu deities, in my experience, are just as much a part of our psychic structure. As with any powerful symbolic form, the Hindu deities represent, and in my experience actually can uncover, helpful psychological forces. They personify energies that we feel, but may never have thought to name or invoke.

This understanding lies behind the practice of deity meditation, which advanced practitioners in the Hindu and Buddhist tantric traditions have developed into a living science for transforming consciousness. In these traditions, a teacher might suggest that a student meditate on a particular deity in order to activate qualities in his or her own psyche.

Deity meditation can unsnarl psychological knots—for instance, issues with power or love—and call forth specific transformative forces within the mind and heart. It puts us in touch with the protective power within us, and can change the way we see the world.

This is particularly true of the goddess energies—the devis or "shining ones" of the Indian tradition. So, looking for your inner goddess is not just a girl thing. The goddess transcends gender, which is why men as well as women tune into these vibrant forces.

Goddess Power
An obvious way to tap into goddess energies is by contemplating the Big Three Indian goddess figures, Durga/Kali, Laksmi, and Saraswati—the personified powers of strength, beauty, and wisdom. There are several legends about these goddesses' origins. My favorite is the story of the goddess Durga and the demon kings, Shumbha and Nishumbha.

These two demons had taken over the world, and thrown the gods out of their own heaven. At their wits end, the male deities—like kids going to Mom to get them out of trouble—knelt in prayer, and supplicated Durga to defeat the demons.

Durga consented and took form as a gloriously beautiful woman, and flitted into the garden of the demon kings. Connoisseurs of beauty, the demons were delighted, and sent an emissary to invite her to join their stable of wives. "I'd love to," the goddess said. "But there's just one little thing. When I was a child, I took a vow to marry only a man who can defeat me in battle. Silly of me, but you know how girls are." 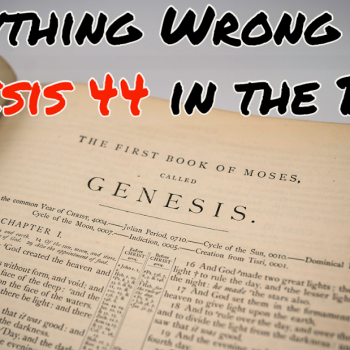 Everything Wrong With Genesis 44 in the Bible
Hemant Mehta
2

The Peripatetic Preacher The Protocols of the Elders of Trump
John C Holbert
Get Patheos Newsletters
Get the latest from Patheos by signing up for our newsletters. Try our 3 most popular, or select from our huge collection of unique and thought-provoking newsletters.
From time to time you will also receive Special Offers from our partners that help us make this content free for you. You can opt out of these offers at any time.
see our full list of newsletters
Editor's picks See all columnists