Growing up as a not-all-that-affiliated Jew in Dallas, Daniel didn't exactly have what we might call a "positive Jewish upbringing." His two days of Hebrew school per week meant getting shuttled to his "Jew school" when the rest of his world was off.

At Hebrew school, Daniel recalls the teachers seeming to want to be there even less than he did. They came off as not really believing what they were teaching. It was as if they saw themselves as part of a generational routine; an assembly-line of sorts, robotically passing the torch of Judaism in a zombie-like state of melancholy. Daniel learned about Jewish "traditions"—that Jews were to separate milk and meat and to keep Shabbat, but he had never actually seen such a thing in practice.

Once a year, Daniel was sentenced by his mother to a day of synagogue confinement. That's how it felt anyway.

He would inform his friends that due to his having to do the whole Yom Kippur "Jewish thing" he would not be coming into school the next day. When they'd break out into their envious "No way, that's so awesome!" routine, he'd let them know that it was the one day he'd rather be in school.

But something changed for Daniel in his teenage years.

At age 16, Daniel's non-observant but proud Jewish father sent him on a trip to Israel. In Israel, Daniel came in contact with a type of Jew he had never met before. You see, while growing up, a Jew meant the antithesis of anything cool—whiny, unattractive, easily pushed around, and not someone you'd want to be seen with.

So, when Daniel went to Israel he was expecting a country of "Wimpy Kids." But to Daniel's surprise, when he got off the plane he found a land flowing with broken Jewish stereotypes: pushy cab driver Jews and in-your-face street vendor Jews, police Jews and soldier Jews, druggie Jews and criminal Jews.

It was then that Daniel finally met a Jewish people that he could relate to, enjoy being around, and that radiated with Jewish pride.

For the first time in his life, Daniel actually felt a certain affinity with his people, a certain identity and joy in being Jewish.

A number of years later, as Daniel made the transition into college, he felt a sense of yearning for clarity on who he was and what he was about. At that point, his friends were getting into a piercing and tattoo craze. He decided that if he was going to get a tattoo it was going to be something that would express who he was.

After contemplation he felt that his tattoo should exemplify his Jewish pride and therefore settled on a Star of David. He wanted it so that if anyone would ever try to force him to wear a Jewish star in the future, he'd be able to say, "Look, I beat you to it."

The thing is that Daniel wanted to show his Jewish pride by being a defender of the Jewish people. He wanted to show that he was not afraid of his Jewishness. Therefore, he wanted to put his Star of David tattoo in a place where everyone could see it but he could not see them seeing it. This way they would know that he knows that they can see it, and that he is not afraid of them. Since Daniel was from Texas, where everyone wears shorts all the time, he decided to put tattoo the Star on the back of his calf muscle.

After having the tattoo done, Daniel would scan every bar, club, park, and public place he would walk into, trying to spot the guy that was going to mess with him. He couldn't wait to get into a fight defending the honor of the Jewish people.

But the fight never came. Or, at least, it never came in the manner that he expected it to . . .

Someone came up to him and said, "Hey, you Jewish?"

"Well, actually I'm Christian and I was just wondering about this thing that I heard Jews do with separating between milk and meat."

Taken aback, Daniel responded, "Well, I'm not religious so how should I know?"

In other instances, people would approach him and say, "Hey, you Jewish?"

"Oh well, I'm Christian and I think you guys are great. I love the Jews!"

Or, on other occasions, "Hey, you Jewish?"

Instead of the fight he anticipated the tattoo to bring his way, Daniel was embattled with questions—from Jews and non-Jews alike.

Ironically, Daniel's tattoo turned out to be his yarlmaka. Not only did it espouse Daniel's Jewish identity to all, but it forced him to be aware of his Jewish identity wherever he went and whatever he did. At times, Daniel might have been considering some mischief or something that wouldn't look all that good for the Jews, and Daniel thought twice about proceeding with his questionable activity. "What would people think about Jews if I get caught? Would there be an attack against a Jew as a reaction to something I've done?" 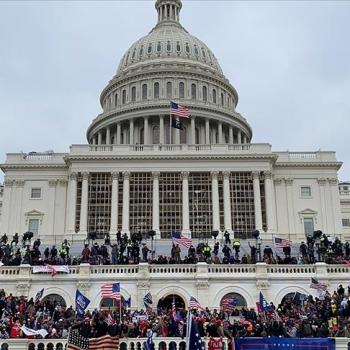 Nobody's Sister and Nobody's Child
Mary Pezzulo
Get Patheos Newsletters
Get the latest from Patheos by signing up for our newsletters. Try our 3 most popular, or select from our huge collection of unique and thought-provoking newsletters.
From time to time you will also receive Special Offers from our partners that help us make this content free for you. You can opt out of these offers at any time.
see our full list of newsletters
Editor's picks See all columnists