Losing for the Sake of Winning 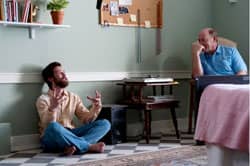 There are few things in life that bring home the value of a good cliché as quickly as becoming a new parent.

A few short months as a father were all it took for me to find a personal favorite: "Pick your battles." Convincing my sons to look both ways before wandering across the street? I'll go to the mat for that one. "Speaking politely and respectfully to one's mother," or indeed "any variety of adult?" Non-negotiable. Eagerly consuming last night's serving of tomato-based side dish? Or embracing the newly-freed Dodgers as one's team of choice? I've learned to keep my parental powder dry.

The vital corollary to the battle-picking adage—one nearly as important to me now as its predecessor was in my first years of fatherhood: don't be stubborn simply for stubbornness' sake.

The Music Never Stopped, an indie film that appeared briefly in theaters earlier this year, elegantly illustrates this very point. Based on renowned neurologist Oliver Sacks'The Last Hippie, it tells the story of Henry and Helen Sawyer as they struggle to rehabilitate their prodigal son Gabriel from the effects of a devastating brain tumor.

When Gabriel stormed out of his parents' house some twenty years earlier, he was a vibrant young man with a bright future—an aspiring musician intoxicated by the anti-war sentiment and revolutionary music permeating one of the most perplexing periods in our history. Now, rendered nearly catatonic by the massive tumor, Gabriel is a shadow of his former self; eerily unresponsive to his surroundings, he meets his distraught parents' efforts at communication with indifference.

Most painfully of all, the cancerous growth has destroyed the parts of Gabriel's brain upon which he relies for the creation of new memories. He is a man locked in a painful past, with no hope of ever escaping it.

But Henry, whose pig-headed, domineering personality played a significant part in their estrangement, refuses to relinquish his son without a fight. Henry discovers that there is a way through the nearly perpetual darkness and silence that surrounds Gabriel—a wildly improbable, wonderfully fitting way for him to once again communicate with his son: music. When Gabriel hears the music he loved most dearly during his formative years—the now-famous sounds of such artists as Bob Dylan, the Beatles, and The Grateful Dead—he comes to life, recalling with vivid detail the events for which their music served as a melodic backdrop. Eagerly recounting those events and reveling in the songs that accompanied them, he is freed from the prison of his mind, and is finally able to recognize his parents and their love for him.

Henry—a dyed-in-the-wool "Jazz & Big Band" man who raised his son on the mellifluous tones of such classic singers as Bing Crosby and Peggy Lee—is appalled. But the stakes are too high for such selfish thinking, and Henry embraces the once-despised music for the sake of his son. He hopes to atone for the harshness of his past by providing his son with a new musical memory.

The two distinct eras in which the film takes place present its creators with a bit of a challenge; Simmons and Seymour are too old to be Pucci's parents in the "flashback" years, and Pucci is too young to be a convincing "last hippie" in the present day segments. There is a nostalgic sentimentality in its handling of the 60's that may come across as heavy-handed to non-boomers. And the story's predictability (particularly in the second act) leaves some of its more emotional moments feeling a bit contrived. But the film easily atones for these shortcomings through powerful performances—Simmons, best known for his cigar-chomping turn as Spiderman's J. Jonah Jameson, is particularly revelatory—an entertaining soundtrack, and the evergreen message.

Realizing that enthrallment to a particular genre of music or a particular political view could never serve as a replacement for his son, Henry steps outside the battlements that have held Gabriel at bay. Age has not lessened his willingness to fight, but it has given him enough wisdom to realize that Gabriel's opposition to his way of life was not a rejection of his father, and that a two-decade "scorched earth" policy was both unhelpful and unfair.