"Money is minted personality." Our use of it reflects our values and our commitments. So why are so few people deeply committed to the mainline church?

Timothy Dalrymple, whose work I always read with benefit, notes that it isn't the economy. In the past, people have continued to give, even when economic times have been hard. But that's not the case this time around. The problem, he argues, is that mainline churches are turned inward. Giving in mainline congregations is down from 2.43 percent of members' income in 2008 to 2.38 percent this year.

But is that really the reason for the downward trend? The Giving USA Foundation and the Center for Philanthropy at Indiana University recently released its report for 2010, highlighting these numbers:

Even more notable is another set of numbers in the report:

The religion subsector received the largest share of charitable dollars, with an estimated 35% of the total in 2010. This subsector has been the largest for 56 years.

So what is the problem? It's hard to say with certainty, of course, as it always is with social trends. The downturn in mainline giving might be traceable to the proliferation of good causes and good organizations. The socio-economic demographics of individual congregations and denominations might account for some of the lost ground. The decline in membership is definitely to blame.

But whatever the mix of factors, it is also clear that we are neither giving our congregations a good reason to give, nor are we forming Christians who are deeply or intrinsically motivated to give.

Put another way: If money is minted personality, then the minting we have been doing is not particularly effective and where the minting is effective, we don't seem to be giving the members of those congregations a good reason to give.

Now replace the word "minting" with the word "formation" and it's not difficult to imagine why we are in a financial bind that is also spiritual—but of a different kind than the one that Mr. Dalrymple cites. The problem is not that we are turned inward. The problem is that we are not deeply "minted" or "formed" as Christians.

That is why the financial funk in mainline churches has more heads than a hydra and that is also why clever pledge campaigns will not solve the problem: We don't teach people the basics of the Christian faith. More importantly we don't teach them that those basics are essential to their existence and therefore, worthy of minting or forming us. And we have been so preoccupied with avoiding practices that might exclude anyone from membership and participation that belonging to a church has become one of a hundred vanilla commitments.

The current conversation around "open communion" is a good illustration: We have gone from inviting all baptized Christians (which is a good thing), to inviting anyone who wants to come. That move seems generous and inviting. Others even argue that it has an evangelical purpose. But Eucharist is a sacrament for those who are baptized that sustains Christians in their relationship with God. So it is something you do because you are minted to believe that it's important. Abandon that fundamental assumption and there is really no reason at all to receive communion or offer it, for that matter. 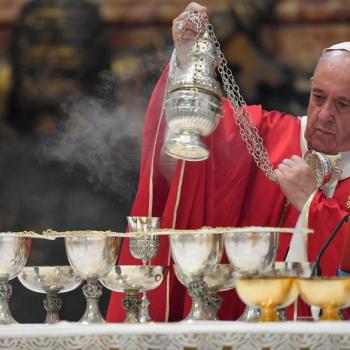 Douglas Murray wants Christianity to stay weird. Will it help him to believe...
Guest Contributor
4