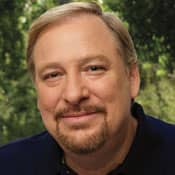 "You don't need to change any of your Pentecostal practices." Such was the advice from a leading evangelical pastor, Rick Warren, to a recent gathering of Assemblies of God (AG) pastors in Phoenix, Arizona, at their biennial council. Urging the ministers not to abandon their use of spiritual gifts, he said, "What you do need to do [instead] is explain them. Do not compromise what God has called you to do; simply make it explainable."

While reminding AG leaders that healthy churches focus on five purposes (worship, fellowship, discipleship, ministry and evangelism), he suggested that Pentecostal church "health" also means a sixth focus: "to be Pentecostal." He used the analogy of a person's first visit to the opera to explain the importance of helping newcomers to Pentecostal charismata understand what is going on: "[You wouldn't] ask the vocalists [in an opera] to sing in English or to change their tune; [you] simply want a little help in understanding what's going on and what it means."

One website currently offers these words of advice to those new to the opera: "Operas are beautiful expressions of the Italian spirit...a tricky world for the novice. Understanding this glorious art requires patience and a willingness to learn. Opera...can bring the viewer to great heights of understanding and self-awareness." Warren offers a clever and considerate analogy to the world of Pentecostalism.

But has today's Pentecostal "tune" changed? And just what has warranted such words from Warren?

In recent years many predominantly white Pentecostal churches in North America have deemphasized the dynamic gifts of the Holy Spirit. The most prominent among the gifts neglected may be speaking in other tongues, and especially the use of this gift within the context of corporate worship.

Speaking in tongues has arguably been the most emphasized charism of the modern Pentecostal movement. Although the leading Pentecostal denominations in the world all emphasize this gift doctrinally, some do so more than others. In fact, the largest Pentecostal organization in the world, the AG, considers tongues "the initial, physical evidence of the Baptism in the Holy Spirit." The "distinctive doctrine" of the AG is that this charism is the primary tangible evidence that a Christ-follower has experienced a "second work of grace" called the Baptism in the Holy Spirit—which believers, according to doctrinal statements, are supposed to "ardently expect" and "earnestly seek."

Oddly enough, however, it seems that this hallmark phenomenon over the past decade has on many fronts been deemphasized, displaced and, in some cases, even placed on hold within churches that still would consider themselves "Pentecostal."

For Pentecostals, the times have changed. A movement that has experienced rapid growth in the past century in the United States amidst periodic controversy and frequent misunderstanding has both influenced mainstream church culture and been influenced by it. Pentecostalism, once unaccepted and spurned by other denominations, has become more welcomed amidst evangelicals than ever before. But has that acceptance come with a price?

Pentecostal and charismatic expressions of praise and worship have arguably had a great influence on many mainstream churches. Since the charismatic renewal of the 1970s and the characteristic celebratory forms of worship that accompanied it, worship teams have replaced numerous choirs and organs across the country. Praises and singing accompanied by upraised hands and clapping, formerly a mainstay unique to Pentecostal or charismatic churches, has become common fair in many mainline churches formerly given to more reverential and contemplative forms.

But while more mainstream evangelical churches have borrowed more charismatic styles of worship and thus grown more "pentecostalized," Pentecostal churches appear to have changed as well, at least in North America. Many report a muting in public worship gatherings of the more demonstrative expressions of spiritual gifts such as messages in tongues with interpretation, prayers for healing, and prophecy. In many cases, churches and mega-churches have relegated glossolalia and other charismata to Sunday night services or small groups. In some cases and places, according to church historian Dr. Stanley Burgess, "it has virtually disappeared."

About Robert Crosby
Robert Crosby is an author and Professor of Practical Theology at Southeastern University. Read his interview with Bobby Gruenewald, the Founder of YouVersion.com (the Bible App) and related articles at Christianity Today, The New Engagers and The Social Network Gospel. Robert Crosby is the author of the new book, The Teaming Church: Ministry in the Age of Collaboration (Abingdon Press).