At 22, Garrett Buechele comes across as a young man very serious about one thing—baseball. By his own admission, he is "a whatever-happens-happens sort of guy," but observing him on the baseball diamond discloses a multi-tool baseball player who has made his rise into Major League Baseball. Almost accidentally finding his way to the University of Oklahoma's baseball team after he graduated from Lamar High School in Arlington, Texas (he had originally thought he would play catcher at Kansas), a drive-by practice session redirected him to pursue college baseball as a member of the Sooner nation.

His was a slow start on a team that required from him a red-shirt freshman season, but the time proved profitable as Buechele developed his greatest strength as a player of the game—his mind. He learned to observe pitchers meticulously, and developed a capability to size up an opponent in ways that still make him a deadly hitter when he steps in the batter's box. When a baseball travels at 97 mph from the pitcher's hand, a batter has approximately .485 seconds to react to the pitch and begin to swing the bat. For most players, the ball passes over the plate so fast that the batter can't even swing the bat before the ball whizzes by them. Not for Garrett Buechele. He states that he usually looks at the pitcher's eyes or watches the top of the pitcher's hand as he releases the ball to formulate his plan of attack to get his best swing underway. And swing he does.

When he emerged after his red-shirt year, he hit .353 and was named the 2009 Big 12 Conference Freshman of the Year—the first time a student from the University of Oklahoma had earned that honor. By 2010, he had become one of the finest players in the conference and served as the team captain for the next two seasons. Third base isn't exactly the safest position to play in the infield—a lesson he learned the hard way. A ball once hit Buechele just above his right eye with such force that it made a large gash that swelled so massively that he could barely see. Yet, he continued to play through the series and battled back with confidence after getting smacked in the hottest corner of the infield.

Baseball is in the Buechele bloodline. His father, Steve Buechele, played in the major leagues for Pittsburgh and the Chicago Cubs. Steve is best remembered, however, for his career with the Texas Rangers; he still works for the club as the manager of a feeder team, the Frisco Rough Riders. When the younger Buechele speaks of his father, the reverence that shines upon his face reveals the closeness of the baseball diamond duo. From his earliest years, Garrett Buechele accompanied his father to clubhouses where he met Sammy Sosa, Nolan Ryan, and many of the greatest players in the Major Leagues.

While football might be described as a spectacle of brute force between men who execute carefully choreographed plays, baseball is a thinking man's game. It is a game of inches that changes moment by moment based on split second plays that can make or break a player. It is a game of patience and endurance; a game that requires a sustained skill set that must continuously improve; a game that teaches (and demands) humility. For every home run, there can often be multiple strikeouts. Buechele is quick to admit that the game has humbled him. "If there is one thing I have learned, it is that things can change quickly for you in this game," he states.

While at Oklahoma, Buechele developed an ability to lead other players in ways that created a unity of heart that was palpably evident to those who watched him play. It was a common occurrence to see him shake a fellow player's hand when they made an extraordinary play or give a verbal shout of encouragement to someone who had just made an error. The volatility of the game became the thrill for this young man who was known in the clubhouse as a premier prankster. It was not uncommon to find a team member's cleat in the freezer or their clothes turned inside out. The culprit was usually quickly revealed, because such creativity could only come from one person—Garrett Buechele. 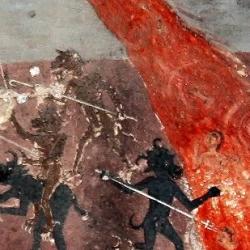 Did Jesus Fail?
Frank Viola
Get Patheos Newsletters
Get the latest from Patheos by signing up for our newsletters. Try our 3 most popular, or select from our huge collection of unique and thought-provoking newsletters.
From time to time you will also receive Special Offers from our partners that help us make this content free for you. You can opt out of these offers at any time.
see our full list of newsletters
Editor's picks See all columnists