"Haute Sphere" Is a Hot Mess

December 08, 2011 by Katrina Fernandez
"Like" the Patheos Catholic Page on Facebook to receive today's best commentary on Catholic issues. 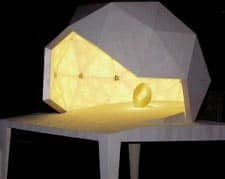 Art's purpose is to convey meaning and express beauty. If a viewer is left in confusion about the artist's meaning, then the artist has failed. If the viewer has to be told what it is they are seeing then something is amiss with the skill and talent of the artist.

Modern art is often too lazy and it therefore fails to express and inspire; as evidence, I present this nativity scene, the "Haute Sphere." At first glance, and without being told, I would not know what this is. There is nothing characteristic of the nativity about this piece. In reading about the Haute Sphere I was not in the least surprised to learn that the French porcelain manufacturer Bernardaud, who crafted the Sphere from a design conceived by architect Sylvain Dubuisson, had "never turned its creative force to the objects or symbols associated with Catholics in the practice of their faith."

Since the sole reason a Nativity scene exists is to cultivate a worship of the Christ—as was Saint Francis of Assisi's intention when he created the first crèche in 1223—an abstract interpretation of the Nativity serves no purpose. You cannot worship Christ or contemplate this Incarnational moment (or even encounter it) if you can't even recognize the scene right before your eyes.

Even before St. Francis there existed iconography, in which we learned why an abstract nativity is futile. With icons the basic elements of a true nativity scene are the Holy Family. In the purest sense, from Orthodox and Eastern Catholic iconography, the only figures needed are Mary, the Christ Child, the ox and the ass. Joseph does not even make an appearance in many Nativity icons. Every element in an icon serves a purpose: to point the viewer to God. Each element has meaning, and each meaning reflects back to the central figure, in this instance, the Infant Christ's role in our salvation. The ox and the ass represent the fulfilling of the prophet Isaiah, "An ox knows its owner, and an ass, its master's manger; But Israel does not know, my people has not understood" (Isaiah 1:3).

The red mantle Mary rests on symbolizes life and the tightly swaddled cloth of Our Lord is reminiscent of a funeral shroud, foreshadowing his death. In Western art the Infant Jesus is usually portrayed with arms outstretched in a blessing. In Eastern iconography the message is one of hope with a hint of sorrow for the Infant born to die for our sins. Behind Christ, is the cave. Western art departs from iconography here as well, which depicts Christ born in a manager. The manager scene may be a more scriptural accounting of events but the dark cave of iconography is more spiritually accurate. The cave represents death that Christ came to conquer. It also represents were humanity was before His birth, in darkness and sin.

With only the very basic figures present in the nativity icon, there is much to contemplate. More elaborate icons include Joseph being tempted by Satan, the shepherds, wise men, angels, and a star in the upper left corner with three rays for the Trinity.

One could contemplate the mystery of His birth all year from a single Nativity icon. I would not waste five seconds gazing on Haute Sphere. Haute Sphere does not lift my mind to heaven or put me in awe of the Word Made Flesh.

"Haute Sphere"'s last and most important failing is its complete disregard for the belief that man was created in the image of God, and that Christ was born in our likeness. When the likeness of Christ is removed and replaced with some abstract thing, the artist has removed the concrete visual reminder that God so loved us he humbly manifested as man for our salvation. Gone is an entire half of His duel nature. Christ was fully human and fully divine. Not fully 24-karat gold sphere and fully divine.

"Haute Sphere" is an epic fail, except in one respect: by rendering the birth of Our Lord in a manner so arcane and indistinguishable, the artist has given powerful testimony to the truth that one cannot successfully express artistically what one does not know or reasonably understand.