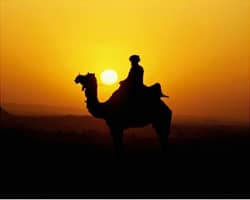 The nascent Muslim community in Mecca was so oppressed, so harassed for its faith that its members were forced to migrate to Yathrib, later called Medina. It was a very difficult thing to do for the Muslims, including the Prophet Muhammad (pbuh) who reportedly said, "O Mecca! I know you are the most blessed of the land of God. If your people did not force me to leave I would never have left you." (Ibn Kathir, Vol. 2, p.285)

The Quran extols the virtues of the emigrants in many places: "Those who have been driven from their homelands and their possessions, seeking favor with God and [His] goodly acceptance, and who aid [the cause of] God and His Apostle: it is they, they who are true to their word!" (Surah Al-Hashr, The Gathering; 59:8)

Indeed, it takes a lot of courage and conviction to leave everything behind and go to a completely alien environment for the sake of God. The Lord comforted the emigrants in the Quranic scripture by telling them, "He who forsakes his home in the cause of Allah, finds in the earth Many a refuge, wide and spacious: Should he die as a refugee from home for Allah and His Messenger, His reward becomes due and sure with Allah. And Allah is Oft-forgiving, Most Merciful." (Surah An-Nisaa, The Women; 4:100)

And, there is another interpretation of the Arabic word hijrah in the Quran, brought forth by Muhammad Asad, which says that the term hijrah (lit., "exodus"), derived from the verb hajara ("he migrated"), is used in the Quran in two senses: One of them is historical, denoting the exodus of the Prophet and his Companions from Mecca to Medina, while the other has a moral connotation—namely, man's "exodus" from evil toward God—and does not necessarily imply the leaving of one's homeland in the physical sense.

The above passage [from Surah An-Nisaa] refers to this wider, moral and ethical meaning of the term hijrah—just as the preceding passage in the same surah (verses 95-96) refers to "striving hard in God's cause" (jihad) in the widest sense of the term, embracing both physical and moral efforts and the sacrifice, if need be, of one's possessions and even one's life. While the physical exodus from Mecca to Medina ceased to be obligatory for the believers after the conquest of Mecca in the year 8 H. [hijrah], the spiritual exodus from the domain of evil to that of righteousness continues to be a fundamental demand of Islam.

Enter Asad's interpretation of verse 100 in Surah An-Nisaa, which in transliteration reads

And he explains this interpretation thus:

The word muraagham is derived from the noun raagham ("dust") and is connected with the idiomatic expression raghima anfuhu, "his nose was made to cleave to dust"; for example he became humbled and forced to do something against his will. Thus, muraagham denotes "a road by the taking of which one leaves one's people against their will. "(Zamakhshari)

It being understood that this separation from one's familiar environment involves what is described as muraaghamah, the "breaking off (from another)" or the "cutting off from friendly or living communion" (see Lane III, 1113). All this can best be rendered, in the above context, as "a lonely road"—a metaphor of that heartbreaking loneliness that almost always accompanies the first steps of one who sets forth on his "exodus from evil unto God."

But, it is worth it, so worth it, because at the end of that (perhaps quite lonely) journey is the smiling face of the Lord and a "life abundant." This life is abundant in God's blessing, grace, love, forgiveness, and mercy.

At the end of that journey, that hijrah, is a place from which you never want to leave. And thus, each of us has to make the choice to forsake our own domains of evil and migrate to the domain of God.

The beauty is, once we start down that path, we will find the Lord running toward us, and even though the start of the journey may be a "lonely road," we will quickly be accompanied by our Precious Beloved, and we will be relieved, comforted, and blessed with a "life abundant." Happy New Year, indeed.