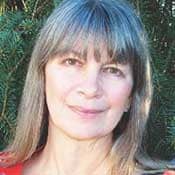 Author Renna Shesso brings a life-long study of mystical traditions to her writing. Initially inspired by her herbalist-astrologer grandmother and the powers of nature, her interests spiraled out into art, mythology and history, archeology, Tarot and the vast lore of the Goddess traditions. Following a beautifully circuitous personal road into healing and wholeness, she now pursues a neatly braided assortment of callings: Tarot reader and teacher, writer, and Shamanic healing practitioner and teacher, labyrinth creator, drumming instructor, priestess of Wicca, and author of Math for Mystics.

We asked Shesso a few questions about her new book A Magical Tour of the Night Sky.

What first sparked your interest in the stars?

My family reunions were camping vacations when I was a kid—imagine the evocative scent of old canvas—and star-gazing was always a part of our evenings. It felt pretty casual and playful at the time, but my grandmother was an amateur astrologer, my uncle went on to work for NASA, and I'm obviously still starstruck.

After childhood, how did your interest continue?

Sparked by my grandmother, I had a decent working knowledge of astrology, but an entirely different fascination with the motion of the Sun and Moon. A special TV science program on Stonehenge with astronomer Gerald Hawkins, the first person to use computers to look at and verify the site's alignments, was an absolute revelation. For me, the excitement wasn't scientific so much as spiritual—it was as if I'd found my form of church.

What is the difference between astrology and astronomy?

Astronomy is the actual workings of the sky; Astrology is when we assign personal human significance to those workings. Notably, if we go back far enough, these were once a single science. Nowadays, many astronomers want nothing to do with astrology, and many astrologers have little grasp of what we actually observe in the sky. Guess it was a bitter "divorce."

What's going on in the sky right now?

In late November, 2011, one of everyone's favorites, Orion is becoming visible in the early evenings again—rises about 8:45 pm—watch it late November to New Year's as it shift to be overhead at midnight. Venus has reappeared as an Evening Star and will be visible after sunset, low in the west, until late May 2012, and then reappear as a morning star in mid-June. Since I view Venus' evening- to morning-star shift as the inspiration for the ancient Babylonian myth of the descent and resurrection of Inanna—which is detailed in the book—this is pretty cool to watch enacted in the sky.

How could someone work with that energy?

Some of the symbolism in the descent of Inanna involves confronting fear and challenges, and triumphing over them. The reappearance of Venus in the eastern, pre-dawn sky becomes a tale of rebirth—that's the kind of inspiration we all need sometimes.

What's the connection of the sky with shamanism?

So much of the sky lore about planets, the zodiac and the other constellations speaks of benevolent beings who worked with humans as healers, or as psychopomps—guiding the souls of the deceased—or who cyclically re-enacted on a vast scale the great mysteries of transformation and moving between the worlds, as with the planet Venus an the descent of Inanna. These themes—healing, guiding the souls of the deceased, moving between the worlds, often as shape-shifters—are all themes that we still explore experientially in shamanic practices. Yes, other spiritual paths treat these themes as well, but if we accept the loose dates of 50,000 to 100,000 BCE for the origins of shamanism, we're looking at the first seeds of that path emerging as people first began to recognize the sky's cycles. Sky-knowledge arose during the same long years in which shamanism arose.

Archeoastronomy emerged in recent decades as a distinct study that mingles archeology and astronomy, looking at how the constructions of earlier people expressed their awareness of the heavens.

Sites like Chaco Canyon and Stonehenge are great examples of this. These and other sites have increasingly been found to have sightlines to the workings of the heavens, most often to the sun at its solstices and equinoxes, and to the moon at its extreme north and south points.

How many of those sites were built by aliens? Or were they?