Tebow and the Mystery of Victory 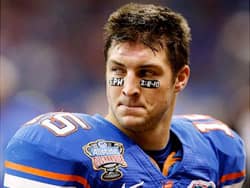 These days it seems one must have an opinion on Denver Broncos' quarterback Tim Tebow. Recently, a friend's son asked me what I thought of Tebow, whose public piety and improbable, come-from-behind victories have both social commentators and sports junkies chattering. Tebow, I responded, seems like a very good man, though his chances for lasting success on the field are uncertain. The boy paused for a beat and then exclaimed that he really wanted to buy a Tebow jersey.

Of course, my opinion about Tebow has precious little foundation. I only know the man through media profiles, and I palm off the opinions of sportswriters when I offer my armchair assessment of his professional prospects. That said, Tebow appears to be an admirable and refreshing sports celebrity, not so much because of the Biblical citations on his eye black, his post-touchdown prayer ritual, or even his off-field decency and humanitarian work. Instead, judging by his public statements, Tebow is one of the few and most prominent religious athletes to recognize that God does not care about the score of football games. If God does regard the game that captivates so much of the Sabbath, concerns about the league's concussions, groupies, and cult of self-idolization are likely much higher on the list.

And this is also why the hubbub around Tebow's remarkable winning streak is dissatisfying. Popular media, more fixated on cultural conflict than actual culture, work to shape the Tebow phenomenon into a stock, religious-versus-secular kabuki production. In this tired morality play—one reminiscent of debate about the "meaning" of Sarah Palin—coastal New Yorker readers, ironists twittering pictures of themselves "Tebowing," and handwringing strict-separationists are to square off against red-state, religious rubes with persecution complexes. The two sides emote against each other and somehow are to view Tebow's on-field exploits as the arbiter of their struggle: watch him lose and smile at how existence mocks the folly of belief, watch him win and see God help His champion prevail in Babylon.

This construct profoundly misses the point, as I suspect Tebow would agree. Religious believers can cheer for the Christian hero in the modern coliseum, but it is also important to remember that his predecessors made their mark by falling to the lions, not by beating the Bears. Christ performed wondrous deeds but in the end won by losing on this world's terms, and popular culture remains confounded by the cross and incurious about the apparent stranger on the Emmaus Road. Accordingly, if, as some NFL talent scouts predict, Tebow will not be a long-term success as a professional quarterback, that outcome may be more fitting than a string of Super Bowl rings. A season-ending interception is a loss only if Tebow and his fans accept their roles in a script that immanentizes the story of their salvation.

Hollywood and sports culture have little patience for losers and less of an eye for ordinary grace. If Tebow's winning streak or career does not end in triumph, any continued dignity, faith, and service on his part—no matter how revolutionary—likely will not be televised. Yet the vast majority of children who order Tebow jerseys will also see their own NFL dreams evaporate. Beyond that, many will grow up to lose jobs, disappoint loved ones, be disappointed by loved ones, and experience dark nights of the soul that persist well past dawn. For those reasons, it may be Tebow's worldly defeat—if handled with grace, humility, and constancy—that could make his jersey truly worth holding on to.