December 02, 2011 by Wilson Brissett
"Like" the Patheos Evangelical Page on Facebook to receive today's best commentary on Evangelical issues. 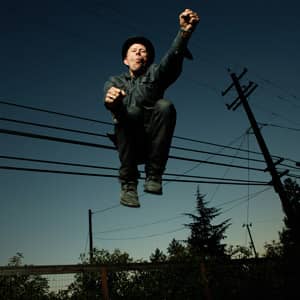 In the title track from his new album, Tom Waits offers a phrase that serves as an apt description not only of the new disc, but of his entire musical career: it's a "letter from Jesus on the bathroom wall." Waits has always been a spiritual performer of a different stripe. As often as not, he casts himself through his music as the outsider, the hobo, the condemned criminal, even the devil—but despite all of this, or rather because of it, his broken-down crooner's voice accrues a kind of moral authority surprising for someone who has built his livelihood out of desecrating traditional pieties.

One reason why this shtick works (and it is working—he won two Grammy's in the 1990s, and Bad as Me opened at #6 on the Billboard chart) is that Waits performs his lyrical blasphemies against a backdrop of soul-piercing melodies, fist-thumping percussive creativity, and world-class musicianship. But Waits—who has demonstrated his Beat Movement credentials by singing Jack Kerouac lyrics and collaborating with William S. Burroughs—also taps a deep vein of more-or-less principled contrarian temperament that's as American as "South Park."

The musical eclecticism that has long defined Waits' catalogue is front and center on Bad as Me, which opens with a frantic musical-theater number ("Chicago"), then a blues-inspired social complaint ("Raised Right Men"), a falsetto-fronted noir-drenched lounge ballad ("Talking at the Same Time"), then a rockabilly soundscape ("Get Lost")—with nine more tracks left to go. But as he excavates, collects, masters, and explodes the full range of American musical traditions, Waits also sustains an ironic dialogue with an American civilization that, in his lyrical imagination, mostly seems to chew people up and spit them out.

This strain is most powerful in "Hell Broke Luce," a harsh industrial march that offers a post-traumatic nightmare of a soldier's return from one of America's wars in the Middle East and ends like this: "Now I'm home and I'm blind and I'm broke. What is next?" A subtler version of this disenchantment shows up in "Talking at the Same Time," a song angry enough to serve as an anthem for the Occupy Wall Street movement: "Somebody makes money when there's blood in the street."

Waits' beef with America reaches way back. He invokes the uncertain pilgrimages of the Great Migration out of the Jim Crow South ("Chicago") and even nods to the Civil War in a song of love lost ("Back in the Crowd"). Waits is at his best when serving up entirely believable, mythical characters, most often men, who have done battle with the world, taken their licks and confessed their sins, but have refused in the end to make peace with the rottenness they suspect is lurking at the core of it all.

This lonely, crusading defiance defines the men who are always hitting the road again in Tom Waits' songs: "Roll my vertebrae out like dice. Let my skull be a home for the mice" ("Satisfied"). Check out especially the mid-disc trilogy of "Get Lost," "Face to the Highway," and "Pay Me." This is not quite the strong, silent type—this is the rude, gregarious voice of Walt Whitman, grandfather of the Beat Poets and original shirker of polite conventions, insisting that "the road wants a man" and there's not a damn thing anyone can do about it.

But this devil-may-care attitude—as attractive as Waits makes it in his relentless critique of the hypocrisies of law-keepers and money-makers—is not the final word, not even for Waits' idea of manliness. Despite the cutting irony of a song like "Raised Right Men," in which we are offered this wisdom: "It takes a raised right man to keep a happy hen," as often as not, Waits' errant men end up hitting the road not to press into their isolation, but to escape the workaday world together with the girl.

So on the fourth track, "Get Lost" is offered as the solution to the problem of feeling "all cooped up," but by the end of the song it's clear that Waits' straightjacketed man is looking to escape into love. This is the same progression Waits developed in "Long Way Home" (Orphans, 2006), where taking a roundabout path morphs from a strategy for avoiding the constraints of domestic life ("I love you, pretty baby, but I always take the long way home") into an invitation to erotic dalliance ("Come with me, pretty baby, and we can take the long way home"). Even the epic rambler of "Pony" (Mule Variations, 1999) finds himself longing for the simple pleasures of marriage at the end of his story: "I wish I was home in Evelyn's kitchen, with old Jeb curled around my feet."