The Brick Bible's Case against Faith

January 04, 2012 by Kathy Schiffer
"Like" the Patheos Catholic Page on Facebook to receive today's best commentary on Catholic issues. 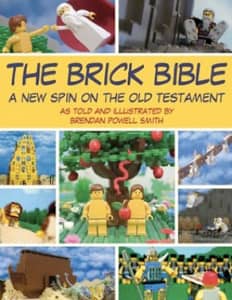 At first glance, a Lego Bible seemed an enviably good idea. The Creation Story, the Sermon on the Mount, the Last Supper—artfully recreated in Lego blocks, then photographed for a picture Bible—seemed an ideal gift for children.

The young artist/creator was quoted extensively in the reviews, explaining his ardent desire to pictorialize each story of the Bible. The Chicago Tribune said, "Beyond remarkable, it borders on genius." Publisher's Weekly called it "a curiously powerful graphic novel."

In 2009, RomeReports TV News Agency featured the Lego Bible—calling it "one man's labor of love" and showing block constructions of the Tower of Babel, the Annunciation, and many other scenes familiar to Christians.

In 2001 the first book was published, including the first six stories from the Book of Genesis. In the ensuing decade, almost 5,000 biblical scenes have been illustrated with Lego blocks, spawning Nativity scene Christmas cards, sets of assorted greeting cards, posters and a series of smaller books, and custom Lego sets, as well as the comprehensive Brick Bible.

But the project turned out to be not the great "faith enhancer" some had imagined. Somehow, it would appear that early fans of the world's largest, most comprehensive illustrated Bible, The Brick Bible: A New Spin on the Old Testament by Brendan Powell Smith, missed an important detail about the author and his perspective on the scriptures.

In November, mega-retailer Sam's Club announced that it was withdrawing The Brick Bible from store shelves due to customer complaints. Parents reported that some images and mature themes were "inappropriate for children."

The discount chain's action has played out large in the media. Smith claims that Walmart and Sam's Club representatives saw an advance copy of the book and expressed interest in selling it in their stores—on the condition that images of Old Testament characters in sexually suggestive poses be removed. He says that the suggestive imagery was removed from the book (although the photos are still available on the Brick Testament website), but that Sam's Club still refused to carry the book. A Sam's Club spokesperson rebuts, claiming that the company was never involved in conversations prior to the book's publication. Sam's Club spokesperson said, "Sam's Club received numerous concerns from our members and parents about the mature content in what is perceived as a children's book. Accordingly, Sam's Club made a business decision to discontinue sales."

Brendan Powell Smith seemed genuinely baffled by the Sam's Club's action, voicing his astonishment in interviews, in a letter to Sam's Club, and on his website. How could it be, he pondered, that the store chain would ban his picture book while not banning the Bible, which contains exactly the same language?

That seems a fair question; in fact, I wondered about it, too. But my research turned up some surprises I could never have anticipated, considering the early popularity of the Lego Bible with church groups and in the media.

First, I learned that the artist Brendan Powell Smith, "deeply shocked" as he is by Christians' complaints about his work, is a self-avowed nonbeliever who embraced atheism at the age of 13. Smith is called "The Reverend" by his friends—a tongue-in-cheek moniker that he picked up in his junior high days—but a defender of the faith, he is not.

"Reverend" Smith, who had attended church services as a child and whose mother taught Sunday school at their local Episcopal church, spoke of his fall from faith (as quoted in a Wikipedia website on atheists): "I had this idea (I'm not sure from where) that it would be a good idea to 'prepare for adulthood' by consciously trying to rid myself of what seemed like childish ways of thinking. I recognized superstitions for what they were, and tried to turn away from 'magical thinking.' I didn't intend for any of this to affect my religious beliefs, but in the end it did in a profound way, and soon enough I found myself the only atheist I knew amongst my family, friends, and community."

Then I reviewed some of the images on his website. There are the placid Garden of Eden, baby Moses in the bulrushes, the familiar Nativity scene, Jesus walking on water.