Why Christians in Egypt Are Holding Their Breath, Part 1 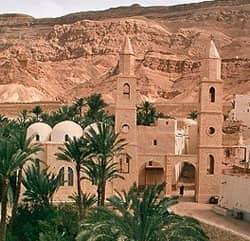 The Monastery of St. Simon the Tanner lays nestled in the shadow of Cairo's Muqattam Hills, in an unbearably squalid neighborhood (unofficially known as "Garbage City") that is home to tens of thousands of mostly Christian trash collectors for the massive urban sprawl. It's not an easy trip for visitors to get there, but once the front gates are open, it's clear that something special is inside. St. Simon's is an active and thriving monastic community, but it is also a sort of celebrity sacred space, with two large congregational meeting halls literally carved from the Muqattam Hills—the smaller of which regularly holds 10-15,000 spirited worshippers for weekly meetings.

Equally amazing are the massive mural carvings of Christian motifs that fill the surface of most of the monastery's towering cliff walls: here is the Resurrection, here is Jesus calming the storm, and here is St. Simon himself, leading the Coptic Christian patriarch and his congregation in prayers that Copts believe literally moved the Muqattam Hills in the late 10th century, after a do-or-die challenge from the Fatimid ruler of Egypt. The very existence of this monastery and the message of its larger-than-life murals punctuate its role as a neighborhood refuge and as an important meeting place for local Christians—including this massive gathering in November of up to 50,000 people for a night of worship and prayer for Egypt. How can such a place exist in the midst of the Arab world's most populous country? Who are these people with such a fierce sense of identity both as Christians and as Egyptians?

The answers to these questions go back to the very earliest decades of Christianity. According to local tradition, the apostle Mark brought the Christian message to the Hellenistic center of Alexandria in 68 A.D., where he was eventually martyred by city officials. Christianity attracted a core group of followers over the subsequent centuries, likely from well-to-do urbanites (including important figures such as Clement, Origen, and the hermit Anthony the Great), but it remained a minority religion in Egypt throughout the Roman persecutions. It so suffered under the weight of the era's violence that the local church began to refer to itself as the "Church of the Martyrs."

Christianity leapt to prominence in Egypt following the reign of Constantine in the 4th century, to the extent that the term "Copt," which simply means "Egyptian" (from the Greek word for Egypt, Aegyptos), became synonymous with local Christians. There, the church had adopted a liturgy based in the idiosyncratic local dialect, a fusion of colloquial Egyptian with a modified Greek script (and some of its vocabulary) that we now refer to as the Coptic language. Egypt remained an important Christian center until the 5th century, when a combination of theological controversy and ecclesiastical rivalry at the Council of Chalcedon in 451 separated the Church of Alexandria—that is, the Coptic Orthodox Church—and a number of other Eastern churches from the communion of the orthodox Christianity of Constantinople and Rome.

By the time the Islamic Conquests swept through Egypt in 641, Egypt's Christians had already experienced two centuries of ecclesiastical division; the Muslim armies' victory thus exacerbated rather than created their isolation. Over the following several centuries, the Copts remained a large proportion of the Egyptian population: early Islamic rule was more interested in political rule than religious conversion, and Muslims probably remained a minority until the 10th century or so. On a daily basis, Christians and Muslims meshed into a common street life that necessitated social and economic cooperation—but not without its systemic tensions, of course. Political rule was closely tied to religious legitimacy, after all, and so successive Muslim dynasties adopted a system in which non-Muslims, mainly Christians and Jews ("People of the Book") in the Egyptian case, were placed below Muslims in a socio-political hierarchy (burdened with extra taxes, restrictions on houses of worship, and other measures) and yet theoretically protected from undue harassment or violence.

The historical record generally shows that it worked out that way most of the time, with many Copts managing to find a place for themselves despite the pressures of Islamic hegemony on the world around them (my recent book, Coptic Identity and Ayyubid Politics in Egypt, 1218-1250, delves into this). There were occasional, tragic exceptions. The most significant of these exceptions came in the 14th century, when Christian and Muslim chroniclers agree that a rash of anti-Christian pogroms under the martial reign of the Mamluk dynasty led to a wave of conversions to Islam. This was likely the most definitive period of exceptional conversions to date, and the time in which the Coptic population shrunk to a decisively small minority in the country.