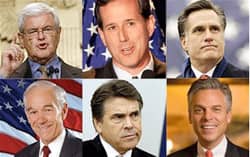 The 2012 election year has finally come, and as already seen in Iowa, the presidential campaign is in full swing. On the Democratic side, there is no contest (but lots of concerns). But the Republican primary process has already given us a chilling glimpse into what is to come for American Muslims. Our faith and our status as Americans look to become an important part of the election.

Former Senator Rick Santorum, thrust into the spotlight by his surprise finish in Iowa, was asked in a debate about who should be profiled in this country: "Well, the folks who are most likely to be committing these crimes. If you look at—I mean, obviously, it was—obviously, Muslims would be—would be someone you'd look at, absolutely. Those are the folks who are—the radical Muslims are the people that are committing these crimes, as we've—by and large, as well as younger males." And that's just one example of what some Republican candidates are inferring and saying about Muslims. I would also be remiss if I did not mention Newt Gingrich and his incessant claims about the "threat" of "Sharia law" to our country.

These criticisms will only intensify as the months pass on the way to the November elections. Islam will be demonized, and Muslims will be more and more "otherized" and scapegoated. Just recently, state Rep. Judy Manning (R-GA) said of Mitt Romney, "I think Mitt Romney is a nice man, but I'm afraid of his Mormon faith. It's better than a Muslim."

Yup . . . hold on to your seats, folks, it's going to be a rough ride for American Muslims.

I never cease to be baffled by comments like these. The truth about Islam and Muslims is so different than what is presented in the media to the minds of many Americans. The season of Jesus and his birth has just finished. Don't our fellow Christian Americans realize how much Muslims love Jesus? Don't they know how much of the Quran extols the virtues of Christ? Don't they know the number of times Jesus (and his mother Mary) is mentioned in the Quran? I penned a piece about the Virgin Mary last December and gave it to a devout Catholic colleague. She was stunned at the beauty of the Quranic description of the both the birth of Mary and her son, Jesus. My brother-in-law gave it to his co-worker, and the reaction was the same.

It seems like our fellow Americans do not know how much our faith honors all of the Abrahamic prophets. Whether it is Moses, Abraham, Isaac, Joseph, Jacob, David, or Solomon, they are all revered, and respected, and honored in our faith. It seems incredulous that I must re-state the fact that we Muslims worship the same God of the other Abrahamic faiths. "Allah" is simply the Arabic version of "God." And, if Jesus were alive today, he would also call God "Allah." Moreover, open up an Arabic Bible, the word for "God" is none other than "Allah."

Most American Muslims are just like most other Americans: patriotic, country-loving citizens who work hard every single day to contribute to the greatness of this country. As the TLC show "All-American Muslim" showed, we are normal people like everyone else. We are teachers, doctors, lawyers, football coaches, police officers, firefighters, and nurses. One of my closest friends, whom I consider to be a brother, was on the ground on 9/11 as a first-responder helping the injured on that horrible day.

Now, that fact doesn't sit well with some Americans, as the Lowe's advertising controversy with "All-American Muslim" showed. They would like to have everyone believe that the actions of criminals acting in Islam's name speak for the whole of Islam and Muslims. But that doesn't change the truth: Muslims are not the monsters that some make us out to be. Islam is the not the "evil" that some make it out to be.

And, to be fair, there are some in the GOP who have acknowledged as much. The most shining example is New Jersey Governor Chris Christie (another Republican), who defended his appointment of a Muslim judge and called the hysteria about Sharia law "crap." And New York's Mayor Michael Bloomberg is another politician (not a Republican) who has refused to join in the demonization of Muslims for political gain.

Since the forces of division will not stop trying to demonize Islam and Muslims, we must not stop telling the truth about our faith and our people. The election season may be rough for American Muslims, but in the end, all will be right and good. The forces of hatred will not win. That is because our country is a great nation, and our people are a great people.