January 06, 2012 by Daniel Darling and Matthew Soerens
"Like" the Patheos Evangelical Page on Facebook to receive today's best commentary on Evangelical issues. 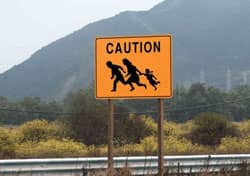 The conventional wisdom among pundits and journalists holds that immigration is a key to winning over the evangelicals who dominate the Republican presidential nominating process in the early states. This is why the GOP candidates continue to jockey to see who sounds more restrictionist.

But this thinking fails to capture a growing sense in the larger evangelical world that the problem of illegal immigration must be handled with care, not because of electoral sympathies, but because of a changing sense of mission in the church.

Like most Americans, evangelicals are concerned about immigration. We believe a government has a right to uphold its laws and secure its borders. This is drawn from the Scriptures' delegation of authority to man-made government (Romans 13). But increasingly, this generation of Christians is awakening to another set of biblical injunctions: the responsibility to care for the vulnerable among us, especially the alien. Evangelicals are committed to addressing immigration-both in our interpersonal interactions with newcomers and in the public policies that we advocate-in ways that both honor the law and are faithful to the divine command to "love those who are aliens" (Deuteronomy 10:19).

Historically, evangelical organizations have been largely silent on the plight of the immigrant. Causes such as abortion and the sanctity of life have dominated their political engagement. But in recent years, and even more in the last few months, attitudes have shifted toward the undocumented immigrant in our midst.

In June, at their annual gathering in Phoenix, the Southern Baptist Convention approved "On Immigration and the Gospel," a resolution that affirms the need to secure the border, but denounces some of the nativism and bigotry of the movement and calling for a legalization process for the undocumented. Dr. Russell Moore, dean of the school of theology at one of the SBC's most influential schools, Southern Seminary, wrote in a widely distributed blog post:

While evangelicals, like other Americans, might disagree on the political specifics of achieving a just and compassionate immigration policy, our rhetoric must be informed by more than politics, but instead by gospel and mission.

Similarly, SBC President Bryant Wright, in a sermon on the topic at Johnson Ferry Baptist Church in Marietta, Georgia, in September, reminded Baptists and other evangelicals that "if you allow your authority to be a politician or a political ideology or talk radio or news media when it comes to any issue in life over the Word of God, you are outside the will of God."

In September, a column entitled, "Christians, Immigrants, and Liberty" written by Tony Woodlief appeared in WORLD Magazine, a weekly news magazine influential amongst conservative Christians. Woodlief denounced the new set of restrictive immigration laws recently enacted in Alabama. Woodlief writes, "The Alabama law runs the risk of criminalizing-at the capricious whim of an armed bureaucrat-Christian charity and evangelism." In October, World featured a piece entitled, "A Dream Deferred," sympathetic to the Dream Act, a piece of legislation most Republican legislators opposed when it came to a vote in Congress last December.

On September 15-16, Focus on the Family interviewed Samuel Rodriguez, Jr., President of the Hispanic Christian Leadership Conference. Rodriguez and the new Focus President, Jim Daly, highlighted the conservative core values of faith and family in the Hispanic culture and why their increasing growth rates are a positive trend the church should embrace.

These developments are significant, because they represent a subtle shift in the attitudes among stalwart Christian conservative organizations. But they have arisen out of an awakening sense of mission among younger evangelical leaders. In recent years, bestselling books, seminars, and church-planting movements have placed renewed emphasis on reaching the nations with the gospel, which includes embracing diverse peoples and urban centers that might seem at odds with the conservatism of white suburbia.

Younger evangelicals see immigration less as a law-and-order issue and more as a justice issue. It's part of the expanding pro-life base, where Christians champion the cause of the unborn, fight human trafficking, and see the undocumented immigrant as a life worth saving. It is a nuance informed not by political sensitivities, but by Scriptural convictions. Nothing highlights this shift amongst younger evangelicals better than a conference held in late October at Cedarville University, a conservative Baptist college in Ohio: the G92 conference, which drew its name from the 92 references to the Hebrew ger (immigrant) in the Old Testament, drew more than 1,000 students from twenty different colleges.