The Heroic Teen Mentioned in the Eucharistic Prayer

January 19, 2012 by Pat Gohn
"Like" the Patheos Catholic Page on Facebook to receive today's best commentary on Catholic issues. 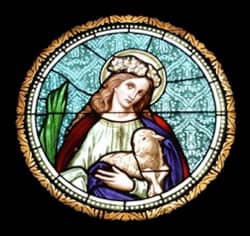 Let no one despise your youth, but set the believers an example in speech and conduct, in love, in faith, in purity. (1 Tim. 4:12)

One of the treasures of the Catholic Faith is the Communion of Saints, and in particular, the younger saints and blesseds who lived their faith passionately, refusing to be threatened by fear. That includes not letting one's sexual purity and integrity be shouted down or coerced by a noisy culture that has no respect for God or human dignity.

Consider this week's January 21 memorial for St. Agnes—a saint and martyr who typifies how young teens can courageously set the example. A young girl from a Christian family, Agnes died during the early religious persecutions in Rome, perhaps around 304.

Agnes is one of only seven women mentioned in the Martyrology that is prayed within the Roman Canon, otherwise known as Eucharistic Prayer I. (That Canon is one of the oldest prayers we find in the Mass short of the Lord's Prayer that dates back to Jesus himself.)

To us, your servants, who, though sinners, hope in your abundant mercies, graciously grant some share and fellowship with your holy Apostles and Martyrs: With John the Baptist, Stephen, Matthias, Barnabas, Ignatius, Alexander, Marcellinus, Peter, Felicity, Perpetua, Agatha, Lucy, Agnes, Cecilia, Anastasia and all your Saints... (Eucharistic Prayer I)

St. Ambrose places Agnes's death at age 12, and St. Augustine places it age 13. Lively faith at such an age is remarkable, as was her determination to consecrate herself to Christ, alone; a beautiful girl of (given the times) marriageable age, she declared "Jesus Christ is my only Spouse."

The days leading up to her death involved her rejection of a persistent suitor with strong political connections in Rome. Her refusal led to her being publicly identified as a Christian, and she was thrown in prison. But her torture did not stop there.

Agnes was promised her freedom and many lovely gifts if only she would deny Christ and atone by offering incense at one of the Roman temples. She remained stalwart. She was further humiliated by being sent to a brothel where she was publicly stripped. It is said that an angel protected her. Not to be thwarted, the authorities led Agnes away to die.

At the end, Agnes bowed and prayed and was killed by a stroke of the sword that cut off her head. Her skull is preserved as a relic in St. Agnes Church, near Piazza Navona in Rome.

Agnes lived her faith fearlessly in the public square and in private. She once said: "Christ is my spouse. He chose me first, and His I will be." Her devotion to purity—in spite of the sin embroiled around her—makes her a worthy patron saint of chastity, young girls, engaged couples, and rape victims. She is often depicted with a lamb, recalling her innocence and purity.

The pope invokes Agnes's memory every year by blessing two white lambs on her feast day. And why would that be?

Perhaps you've noticed Pope Benedict wearing the pallium at Mass, a white wool "accessory" that rests over his chasuble.

[T]his band of white wool . . . encircles the shoulders and falls in two strips hanging down in front and back. Its yoke represents the lost sheep that the Good Shepherd seeks out and carries home on his shoulders. Five red crosses signify the wounds of Christ; and three jeweled pins, once used to hold the garment together and attach it to the chasuble beneath, symbolize the nails that fixed Jesus to the cross . .

[E]ach year on the feast of Sts. Peter and Paul (June 29), the pope invests new archbishops . . . with the garment. New pallia are woven in part from the wool of lambs blessed every year on the feast of St. Agnes (Jan. 21) in the church of St. Agnes-Outside-the-Walls in Rome. On the evening before St. Peter's Day, the pope places them overnight in an alcove below the high altar in St. Peter's Basilica. This niche lies directly above the tomb of St. Peter himself, and so the pallia are thought to become contact relics, blessed by the apostle whom Jesus commanded to "tend his sheep" and "feed his lambs," and offering a share in his authority. Reception of the pallium is thus a sign of a bond to the see of Peter and of participation in the pope's universal solicitude as vicar of Christ, the Good Shepherd. ("Bonds of Wool" Steven A. Schoenig, America Magazine, January 16, 2006)

Wearing the pallium of lamb's wool is another reminder of the purity with which Bishops are to carry their office, ready to bear the wounds of Christ, and ready to die, for the sake of their flocks.

I once heard Fr. George Kosicki, CSB, renowned authority on the devotion of the Divine Mercy, teach that the fastest and most direct way to get to heaven is to be a martyr, to die for the faith.

Okay, you say, that might work for the likes of uber-Christians like St. Agnes. What about the rest of us?

The rest of us are to die daily.

St. Agnes of Rome, pray for us.