Law and Religion in Indiana

One of the assumptions on which the United States is built is that the average person is really pretty smart, and is therefore capable of governing himself, as long as he follows certain fairly obvious rules. And I think this is largely true. To the extent that it is not true, this simple assumption is at least something to which we can and should aspire. We plan and run our own lives (well, until recently, anyway), and elect our own representatives (well, maybe, anymore). It's not perfect, but the basic assumption works well enough much of the time, which engenders a sense of trust between us and our fellow citizens. Then along comes the Indiana legislature with the likes of this, in their Senate Bill 251:

Sec. 4.6. (a) In order that each student recognize the importance of spiritual development in establishing character and becoming a good citizen, the governing body of a school corporation or the equivalent authority of a charter school may require the recitation of the Lord's Prayer at the beginning of each school day. The prayer may be recited by a teacher, a student, or the class of students.

This bill contains several hedges against charges of oppression. The school district may require this prayer, but doesn't have to, and is even allowed to select which version of this Christian prayer is used. Also, the student may participate, but doesn't have to. How nice. It would have been nicer if it said that each student in some random order can specify which prayer from whatever religion is said each day, or perhaps no prayer at all that day, but even that wouldn't make this travesty okay.

To truly understand the impact of this bill, perhaps the senators of the great state of Indiana will agree to be compelled to visit their local rifle range daily and parade the target line while wearing shirts with concentric circles painted on them. This is similar to the position they place a student in, should the student choose not to participate in this supposedly voluntary prayer.

I can hear it now: "Oh no, everything will be fine! No one reciting the Lord's Prayer would ever do anything to hurt someone else."

But things happen in school hallways, and on school buses, and at the mall on weekends. Things the school, or Jesus, wouldn't necessarily approve of. Things the school, and Jesus, are in fact powerless to stop. Things that, by all rights, should be legally classified anywhere from chronic harassment to felony assault. Things like this happen all the time. If someone tries to tell you they don't, that someone is living in a fantasy world. And trying to use the school administration or the police to treat such problems often only makes these problems worse. We don't need to aggravate the situation with ill-conceived laws.

They can talk about good citizenship until they're foaming at the mouth (and someone probably will), but it is not a proper function of government to put people, and especially other people's children, in positions like this.

That's why we have a First Amendment. What part of "Congress shall make no law . . ." do they not understand in Indiana? Is it something in the water, or just an isolated and random case of Immense Doltery? Of course, the First Amendment only applies to the Federal Government. Or at least it did until the Fourteenth Amendment came along. People have realistic disagreements about what certain aspects of the Fourteenth mean, but not that aspect.

The word democracy gets thrown around a lot, as if it were an unalloyed good. It's true that there are things that must be decided by majority rule. Our Founders knew this. They also knew that unbridled majority rule is nothing other than organized mob rule. So they put a bridle on it, spelling out which aspects of our government involve majority rule, and also specifying some of the aspects that are immune to any majority, under any circumstances, ever. Religion, as practiced by individuals upon themselves, is one of those. Do they teach this vital bit of knowledge in schools in Indiana? How is it that their senators don't know it? Or were they taught somewhere else that Freedom of Religion only means Freedom of Their Religion, all others be damned? And where would they have learned that?

I really believe it is true that most of us can run our own lives, and that, together, we can run our country. I also know it is true that many people will try to get away with something if they think they can, especially if there is a majority involved. Here we have at least one member of the Indiana Senate involved in this latter kind of business. May all such people very uncomfortably endure all the derision and laughter they deserve, which is a lot. And may their fellow citizens vote them forcefully out of office at the next election. Because people need to know, and real Americans do know, there are some things a virtuous citizen doesn't even try to do, even if he is in the majority.

A Sign in the Heavens
John Mark N. Reynolds
2

My Anger And The Will of God
C. Don Jones
3 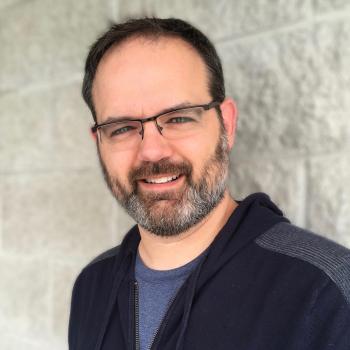 What if you reached 1K people this month?
Jared Ingle
Get Patheos Newsletters
Get the latest from Patheos by signing up for our newsletters. Try our 3 most popular, or select from our huge collection of unique and thought-provoking newsletters.
From time to time you will also receive Special Offers from our partners that help us make this content free for you. You can opt out of these offers at any time.
see our full list of newsletters
Editor's picks See all columnists