Occupy Islam: Activism in the Face of Apathy 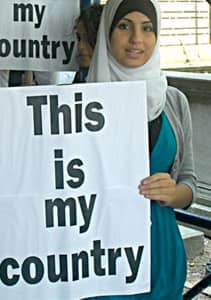 There is a frustration bubbling among the most active Muslims, and, strangely enough, it stems more from the inaction of the Muslim American community itself than from marginalization by ignorant Americans. "There seems to be a disturbing amount of apathy when it comes to issues," explains Imraan Siddiqqui, a journalist for the Voice of America. "Many think the best way to react to a hostile environment is to ride the situation out, and that this will all pass."

Well, the rancor toward the Muslim community in this country has not passed; in fact anti-Muslim sentiment is on the rise. Muslim Americans have whiled away the past decade 'reacting' to a post-9/11 world—these responses include heaping blame on the 'radical right' for pushing Islamophobia into the mainstream. Yet, little time has been dedicated to reflecting on the role we ourselves play in shaping our status as a community or to developing a bold, proactive public relations campaign to squash hateful attitudes toward Muslim Americans.

Not only do we tend to deflect responsibility onto another actor in a time of crisis, but we also fail to give a comprehensive and timely response to the media and general public. Our timid approach in defining ourselves as a community only gives others the opportunity to seize the headlines. Eboo Patel, Interfaith Youth Core Founder and President, points out one salient example of our collective delayed reaction. "It took Muslims a full three months to figure out a strategy to counter the campaign against Cordoba House, otherwise known as "the Ground Zero Mosque."

The construction of a mosque near Ground Zero or a Peter King hearing should not occur every few months to remind Muslims how poorly they are perceived.

However, with time comes wisdom, and the past year has reinvigorated hope throughout the Muslim Ummah. The ethos left behind by the Arab Spring deserves the largest share of credit for shaking Muslim Americans out of our fatalistic, apathetic attitudes and into a more empowered state. The string of government overthrows in the Middle East transgressed the paradigms of democracy and geographical region, inspiring Muslims around the globe to stand up and speak out, notes James Zogby in his piece, "Arab Spring Effect."

In cheering on our Muslim brothers and sisters in the Middle East, both from our televisions and from the streets, Muslim Americans regained a sense of community that the routine of everyday life usually washes away and we realized the power of solidarity. Daniel Tutt, Huffington Post contributor and Unity Production Outreach Director, highlights the importance of a presenting a unified, cohesive front in the successes of both the Arab Spring and Occupy Wall Street:

The act of occupying, of coming together face-to-face in our social media driven lives, enables a break with the political layer of affects. Coming together with major numbers (numbers now matter) and occupying public spaces leaves an effective impact.

Upon seeing what bold collective action can accomplish, Muslim Americans have indeed become increasingly politically and socially engaged in 2011, according to a Gallup poll. The community was provoked many times throughout the year and with each incident we began to shed our reliance on the victim card and faced the problem head-on. For example, in early January, a dozen New York Muslim leaders boycotted Mayor Bloomberg's annual interfaith breakfast due to the mayor "ignoring concerns that the New York Police Department has been using racial profiling and violating civil rights in its anti-terrorism surveillance programs."

Muslim Americans closed 2011 with an example of our most speedy and unified response to anti-Muslim sentiment. Just as large groups can wield tremendous influence, so too can the fringe minority, and when Lowe's pulled its ads from the reality show "All-American Muslim" after being prodded by one prejudiced man, the Muslim community organically banded together into a powerful force.

"This time around, it took [Muslims] about three hours [to speak up]," said Eboo Patel. We educated friends on the issue through social media, recruiting over 40,000 signatures in the span of a few days, and they took to the streets, holding over ten protests, and counting, across the country. Muslim American leaders are optimizing on this incident to create a roadmap for developing a long-lasting coalition that can organize against such crises. In fact, this video is the product of activism, showcasing how these individuals used their artistic creativity to innovate new solutions to an old problem that isn't unique to their community: bigotry (http://youtu.be/Ij8cbRG7vzo).