Many are familiar with the fact that the word ;Kabbalah' means receiving—we are receiving the deepest teachings that have been passed down through the generations from teacher to student. In order to truly grasp these teachings, we cannot simply go out and learn them. Rather, we must open up a place inside ourselves where they can be received and become a part of our very being.

However, the word ;Kabbalah' also comes from the Hebrew word makbeel, meaning parallel. One of the most fundamental teachings of Kabbalah is that G-d looked into the Torah and created the world; that is to say, the Torah is the blueprint of the world. Just as a builder looks at a blueprint and then builds a building parallel to that which is in the blueprint, so did G-d look at the Torah before creating our world to match it.

The implications of this are astounding. For example, it is well-known that, according to Judaism, we should bless G-d when partaking of His world. If we have a snack, wear new clothes, or even see a beautiful person, there is a blessing for it. We all think that the way this worked was that originally there was a fruit and so G-d said that we ought to make a blessing on it. However, when we understand that our physical world has its root in the spiritual, we see that really G-d ﬁrst looked into the Torah and saw that there is a spiritual concept of making a blessing, and therefore G-d created the fruit. In a similar vein, we think that our eyes permit us to see, whereas Kabbalah teaches that our eyes are actually what stop us from seeing: When we were purely spiritual—before we were in our bodies—we could see from one end of the world to the other. Now we are limited to seeing as far as the eye can see.

This concept holds true for everything. All that exists in our physical world is a reﬂection of a higher spiritual reality.

Taking this a step further, if the Torah truly is the world's blueprint, then the Torah pre-existed creation. And if the Torah pre-existed creation, so did the building blocks of the Torah, the Hebrew language. This is why the Hebrew language is referred to as the Holy Tongue. It is the language of creation. The model throughout the story of creation is: ;G-d spoke and then that thing came into being'. This means that G-d said the word, and then that word actually materialized. It wasn't that G-d created something and then decided what to name it afterward. When G-d speaks, that word materializes to become a physical manifestation of its true spiritual self. (For example, "Let there be light; and there was light."—Genesis 1:3.)

A thing is simply the physical manifestation of that which God called it. This is why the word meaning ;to speak' in Hebrew, l'daber is the same as the word for ;thing', davar—because the word literally is the thing. In many cases this is easy to see. For example, a ;dog' in Hebrew is called a kelev, which literally means like the heart, man's best friend. The most physical and brute animal, the ;donkey', whose lot it is to simply carry a physical burden on its back, is a chamor in Hebrew, which is closely related to the Hebrew word chomer, meaning matter or physicality.

Similarly, it is well known that humanity was originally named Adam because we were formed from the dust of the earth, adamah.

What's more is that the word Adam is made up of the ﬁrst letter of the Hebrew alphabet, alef, and the Hebrew word for ;blood', dam. In Kabbalah there is a basic understanding that each of the Hebrew letters have a numerical value. Obviously, the ﬁrst letter symbolizes the number one. In Judaism, the number one can always hint to the One God. So, the name A-dam hints to a coming together of God and blood. If we break down Judaism's understanding of a person, it is exactly this: ﬂesh and blood with a spark of Godliness, a coming together of body and soul.

Nowadays, out of those who are even involved in spirituality, most are occupied with it as a side pursuit. But to begin to grasp life and the world in its true light, one needs to have a clear understanding of what is primary and what is extraneous; what is the cause and what is the eﬀect; what is reality and what is virtual reality. Just as one's body is encoded in its DNA, so too, the world is encoded in the Torah. And just as everything the body does originates in the brain, so do the physical world and its events ﬂow from the deeper spiritual reality. 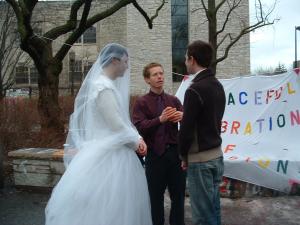 Here We Go Again! The Peripatetic Preacher (6th Sunday of Easter May 9, 2021...
John C Holbert
Get Patheos Newsletters
Get the latest from Patheos by signing up for our newsletters. Try our 3 most popular, or select from our huge collection of unique and thought-provoking newsletters.
From time to time you will also receive Special Offers from our partners that help us make this content free for you. You can opt out of these offers at any time.
see our full list of newsletters
Editor's picks See all columnists