Taking Care of Our Own

January 25, 2012 by John Fea
"Like" the Patheos Evangelical Page on Facebook to receive today's best commentary on Evangelical issues. 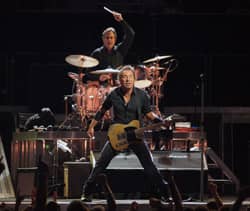 What is this experiment that we call the United States? What did Thomas Jefferson mean by the phrase "the pursuit of happiness?" What is the promise of America?

For many, the American creed is about individual liberty. Citizens of the United States are free to worship without government interference. They are able to consume freely to satisfy their material wants and desires. They climb the ladder of success with unrelenting ambition.

While this commitment to freedom and liberty has been an important part of our national history, it has often been balanced with the willingness of Americans to sacrifice their self-interested pursuits for their neighbors and fellow citizens in need. The Founding Fathers called this "republicanism." Christians call it "living out the gospel."

In popular culture there is no one who understands this tension between individualism and community better than Bruce Springsteen. As a young artist in the 1970s and 1980s, Springsteen's music celebrated the American dream as defined by individualism. He encouraged us, in the wildly popular "Born to Run," to break out of our "cages on Highway 9" in pursuit of a "runaway American dream." And maybe, if we run hard enough, we will "get to that place where we really want to go and we'll walk in the sun."

On the same album as "Born to Run," Springsteen urged us to get in our cars and drive "Thunder Road"—a two lane highway that "will take us anywhere." The final words of the song are telling: "It's a town for losers, I'm pulling out of here to win."

But as "The Boss" grows older, his music has taken a decided turn away from youthful individualism and toward community. For example, his 2007 album Magic included a song entitled "Long Walk Home," a moving reflection on his figurative return to home after all those years of running away. There is a sense of new birth in the song, almost as if Springsteen has realized that the community in which he was raised offers much more than what Thunder Road had to offer. He reminds us that "everybody has a neighbor, everybody has a friend, everybody has a reason to begin again." Perhaps those "losers" were not so bad after all. They at least need someone to love them.

At age 62, Bruce Springsteen is not done making music. In fact, he and the E-Street Band will be heading out on tour in a few months to promote their new album, Wrecking Ball. Those close to Springsteen are talking about the album's pressing themes of economic justice, social concern, and spirituality. It is being produced by Ron Aniello, a Grammy-nominated producer known for his work with Christian artists Jars of Clay, Sixpence None the Richer, and Jeremy Camp.

Last week, the Springsteen camp released "We Take Care of Our Own," the first single off of Wrecking Ball. Anyone who listens to this song will hear a Springsteen-like call for an inclusive American community that will only prosper if citizens care for one another. This is Springsteen's republicanism at its best—a call to serve others that is compatible in every way with our Divine call to live out the gospel. There are echoes in the song of our current economic hardships, hurricane Katrina, and the search for meaning amidst life's difficulties. Such meaning, Springsteen concludes, can only be found in tempering individualism and fulfilling the promise of America by loving our neighbors.

"Where are the hearts that run over with mercy?

"Where is the love that has not forsaken me?"

"Where is the work that will set my hands, my soul free?

"Where is the promise from sea to shining sea?"

Mercy. Love. Work. These are the kinds of virtues that are central to a happy and flourishing life. As he so often does, Bruce Springsteen calls us to something higher than our own ambitions. Christians take heed.

About John Fea
John Fea chairs the History Department at Messiah College in Grantham, PA, and is the author of Was America Founded as a Christian Nation? A Historical Introduction (Westminster John Knox Press, 2011). He blogs daily at philipvickersfithian.com.