Free Will: Humans, Animals, and Angels

We also outlined the manner in which a society of adults that make their choices about pleasure based on the Childish definition is going to wind up with a disastrous situation on its hands.

The truth is that making a choice to overcome the Childish side of oneself in favor of making an Adultish decision is synonymous with the difference between Animal-like behavior and Human-like behavior.

The higher choice to act in a Human-like manner is, in a certain sense, miraculous. That is, the classic portrayal of a miracle is God doing something that overrides nature, transcending the way the world usually operates. Thus, when a person overrides his or her own nature, they too, in a sense, achieve a personal miracle. Every time a person feels like lying down on the couch to do nothing, but instead gets up and does something positive, he is overriding his personal nature.

This is the beginning of what it means to be spiritual.

The picture of the spiritual seeker painted by modernity is of the individual at the top of a mountain with long wavy hair blowing in the wind about to float off into the clouds. However, Judaism's take is that spirituality begins to be accessed and achieved only when a person makes a conscious and proactive choice by which he gives of himself in a real way.

On the flip side, a human being that neglects his capacity to choose beyond the whims of his inclinations is essentially acting Animal-like, despite his status as a human being capable of Human-like behavior. After all, a person who merely goes with the flow and does whatever he feels like doing is essentially running on the autopilot of his instincts as the animal does,  whether those instincts are dictated by personal whim or societal ideals.

It comes out that the first step to being spiritual is to discover the miracle of humanhood, and what we mean by that here is the ability to make a Free Will decision thereby rising above the pull of one's initial inclination.

Getting Your Head on Straight
The question of whether or not a person is acting in a Childish manner versus an Adultish manner, or expressing Human-like behavior versus Animal-like behavior, essentially comes down to who is running the show—is it the Brain or is it the Heart?

If the Brain says, "I want to do what's right," and then you follow it up with the passion of the Heart, that is the ultimate and that is the ideal! The Brain is running the show, and the Heart is working for the Brain.

When the Brain serves the Heart in this manner, the human being ends up on a "lower" plane than the animal. After all, for our purposes, the animal is all Heart and no Brain, and, therefore, the animal always follows up on its bodily instincts, having no potential to make higher, spiritual, Human-like choices. However, the human being, consisting of both Heart and Brain, who follows his instincts like an animal does, not only neglects his higher spiritual capacity, but ends up utilizing that Human-like side of himself to serve the Animal-like side of himself.

Is it not obvious that such an individual is worse-off than the animal?

The animal brainlessly and soulessly followed his instincts—but what could he do about that?

The human being brainlessly and soulessly followed his instincts—but he could have done something about it!

On the flip side, we would have to say that the same applies in reverse when comparing the human who acts Human-like and the angel who always does the right thing.

The angel, being purely spiritual, is in a state of total clarity on God and reality when compared to the human being. It is because of this that the angel always does the right thing. Therefore, he is no match for the human being that chooses the right thing by asserting the Human-side of himself in the face of his instinct pulling him in another direction. Obviously, we would say that such a human being is on a "higher" level than an angel. 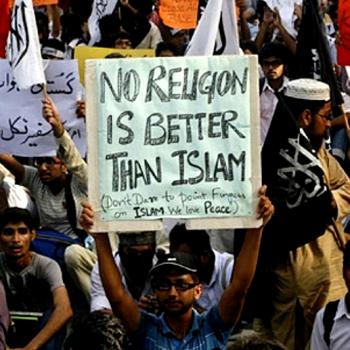 The Accountability Myth
C. Don Jones
Get Patheos Newsletters
Get the latest from Patheos by signing up for our newsletters. Try our 3 most popular, or select from our huge collection of unique and thought-provoking newsletters.
From time to time you will also receive Special Offers from our partners that help us make this content free for you. You can opt out of these offers at any time.
see our full list of newsletters
Editor's picks See all columnists