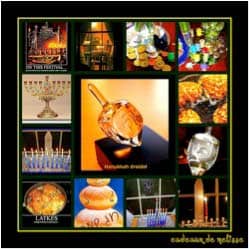 Hanukkah, also known as the Festival of Lights, is a Jewish holiday. It begins each year on the 25th of the Jewish month of Kislev, and lasts for nine days. This corresponds in the Gregorian calendar to a date sometime between late November and late December.

The holiday is a commemoration of the rededication of the temple in Jerusalem (after it had been desecrated) and a reminder of the Hasmonean victory over the Greeks. Antiochus IV, ruler of the Seleucid Empire during the 2nd century B.C.E., had interfered with the Jews' religious rights. He was known to have prohibited Jewish rituals, to have appointed a non-Jewish priest to preside in Jerusalem, and to have ordered a pig (a non-kosher animal) to be sacrificed in the Holy Temple.  A Jewish leader named Mattathias the Hasmonean (and later his son, Judas Maccabee) guided a revolt against the oppression of Antiochus IV. They ultimately were successful in driving away the Seleucid ruler, after which they were able to rededicate their temple.

According to Jewish lore, a miracle occurred at this time. The Seleucids had used almost all of the olive oil in the temple, and only one day's worth remained. The flame on the menorah (candlestick) was not supposed to ever go out, and yet it took the Jews eight days to prepare and dedicate a new supply of oil. Miraculously, the flame continued to burn during these eight days.

Jews remember this miracle, and the Hasmonean victory, each year as they recite blessings and light the eight candles on the Chanukiah. (Unlike the menorah, which has seven branches, the chanukiah has eight, with a ninth stem for an extra candle). One candle is lit on the first evening of the holiday, and another one is added each subsequent evening.

Because Hanukkah occurs close to the time of Christmas, it is often thought of as an important Jewish holiday, or as the "Jewish Christmas." But this is not correct: Hanukkah is only a minor holiday and is not traditionally associated with gift-giving. Yet in countries where the majority is Christian, many Jews combine aspects of Christmas with Hanukkah, including gift exchange.

Besides candle-lighting, Jews often eat special fried foods (reminiscent of the miraculous oil) and play with a dreidel (spinning top) during Hanukkah. Since religious Jewish study was illegal during the reign of Antiochus IV, those engaged in such activity would pretend to be playing with a top whenever a government official was close by. Children especially delight in playing dreidel games, at which they may win small coins or candies.

The Jewish holiday of Hanukkah is often associated with fried foods. This is in commemoration of the olive oil miracle during the rededication of the temple in Jerusalem. Although a lamp only contained enough oil to last for one day, its flame continued to burn for eight days.

One popular Hanukkah dish is Potato Pancakes or Latke (in Yiddish), which are fried in oil. Another favorite treat are deep-fried doughnuts (Sufganiyot in Hebrew).

Combine potatoes and onion into a large bowl. Drain out excess liquid. Add eggs and mix well. Add bread crumbs slowly while stirring until the batter becomes doughy (but not dry). Add salt and pepper. Heat about ½-inch of oil to medium-high heat. Form the batter into thin patties about 3 inches wide. Fry the batter in the oil. Flip over when the bottom is golden colored. Remove cooked latkes and place on paper towels to drain. Top with applesauce or sour cream and enjoy.  Makes about 12 latkes.