Feet on the Ground: Reflections on Fighting HIV/AIDS in Africa

Editors' Note: This article is part of the Public Square 2014 Summer Series: Conversations on Religious Trends. Read other perspectives from the Evangelical community here.

I've worked with Medical Ambassadors International (MAI) for nearly ten years. My husband and I went to East Africa in 2005 thinking we were going to focus on HIV/AIDS prevention education as well as training for home-based caregivers of people living with AIDS. However, the project we were to help with didn't get funded by the Pepfar grant they had applied for.

So we used the strategy for which Medical Ambassadors has become known—Community Health Evangelism (or CHE)—in which community-owned development projects are seamlessly combined with disease prevention and sharing the good news of Jesus Christ. Although we knew there was AIDS all around us, it was interesting to us that the community leaders we dealt with didn't usually ask for help and training in dealing with that issue. There seemed to be too much stigma to even look at it. Instead they wanted to prevent the diarrheal diseases or malaria that killed their children, or they wanted help with agriculture or literacy, or they requested microenterprise training.

However, as the newly-trained home visitors began teaching their neighbors these new things, they often discovered relatives in the back rooms of the homes they visited or orphan children being cared for by aging grandmothers. They would go back to the CHE committee and ask, "We're teaching people about agriculture (etc.) but what can we do about this other problem in our village?" We saw some good examples of communities coming together to deal with AIDS-related issues as a secondary plan.

In one Ugandan village, the CHE committee took on the education of the orphans in their village. They paid for their school fees, their uniforms, and school supplies—an enormous sacrifice for people who can barely pay for their own kids' education. And the orphans' social status rose tremendously as the whole village claimed them as their own.

When we arrived in East Africa in 2005, it was common for evangelical pastors to ignore the whole issue of AIDS. A few denounced those with the disease as sinners under God's punishment; however, it was obvious that many, many AIDS victims had unfaithful spouses who brought home the disease. And it was also obvious to us that poverty fed into the issue. We met young women from the slums who told us, "We have no food. If we go to the streets tonight and make some money, we might get AIDS. We'd rather die of AIDS in the long run than die of hunger now."

Through the next few years, pastors and churches around us began to talk about HIV/AIDS because the weight of the cases became so heavy. It could no longer be "someone else's problem." Many churches we were involved with began looking for ways to compassionately help their own people as well as others. MAI produced an effective curriculum that included ways the church can minister to those living with AIDS. (It also has modules on disease prevention, care of homebound or dying patients, care of orphans, and counseling and emotional care.) One of the biggest benefits of teaching was that people learned about AIDS transmission (i.e., it can't be caught with a touch or breath). That knowledge helped to minimize their fear and stigma toward people with the disease. 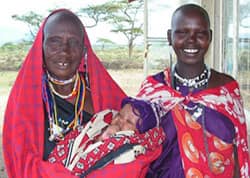 As funds and programs came into the countries of East Africa during the mid-2000s, we heard of cases in which people intentionally exposed themselves to HIV in order to get in on some of the benefits available. The abundance of funding also had a negative effect on our programs, which relies heavily on volunteers. In Ethiopia the home visitors helping with homebound AIDS patients all resigned because "anyone who works with AIDS programs should be well-paid." They figured their trainers must be pocketing the money that was obviously supposed to come to them.

We also knew of cases in which needy or starving children who did not have AIDS had no access to programs of feeding or help, but those who did have AIDS were much better off. All the money being thrown around produced an odd imbalance.

One huge positive effect of the money being expended was that AIDS treatment medications became available to the average person. In the course of a few years (from 2005 to 2007) even rural people with AIDS in East Africa had access to treatment, and suddenly faced a reprieve on the death sentence facing them.

There is currently a wonderful AIDS prevention program among the Maasai people in Tanzania, led by a group of evangelical elders in the tribe. They decided they needed to work on prevention of HIV and sought out the MAI missionaries to teach them. (These folks are now with ReachGlobal International, but continue the project.) The Maasai had cultural practices that fed straight into HIV transmission, such as the right of an age-mate to claim his right of intercourse with anyone else's wife. He just had to plant his spear outside the door of her hut, and the husband couldn't come home that night. And if a man died (perhaps of AIDS) his brother had to take the widow as his second wife. But first the village "cleanser" had to have sex with her in order to cleanse her of any disease she might be carrying.