The LDS Church finds itself again in the media spotlight, following news reports that disciplinary hearings would be held for two outspoken Mormon activists—one of whom, Kate Kelly, has been excommunicated for her role in the Ordain Women movement. The media attention has triggered new conversations about gender roles, priesthood, and church leadership. Some are concerned that the church is doing too little to expand opportunities for women. Those in favor of more rapid and more extensive change find hope in the Mormon concept of "continuing revelation." Others are dismayed by the rise of public advocacy, on the grounds that it undermines the church's leadership and contradicts core teachings about the roles of modern-day prophets and apostles.

Where does the conversation go from here? How can women's voices find greater inclusion in church councils and curriculum? Which doctrines about gender are eternal and indisputable, and which are the products of history and culture?

John Dehlin and Kate Kelly: Reflections on Church...
A woman of faith reflects on the practice and purpose of church discipline.
Featured Panelists

Purity, Power, and Principled Pragmatism
Perhaps we gain some wisdom by placing the recent debates over feminism, gender roles and...

Is gender inequality bad for mental health?
Editors’ Note: This article is part of the Public Square 2014 Summer Series: Conversations on...

Are Mormon Women Allowed to Ask Questions?
Here are a few reasons that persuade me that LDS leaders, local or general, were not...

Joseph Smith on Mormon Women and the Priesthood
History suggests that Mormon women were originally established in an organization that Joseph...

Expanding the Conversation: Mormon Women, Personal...
In a religion that inextricably links priesthood with the simple fact of being a worthy male...

Here I Stand. God Help Me, I Can Do No Other.
Editors’ Note: This article is part of the Public Square 2014 Summer Series: Conversations on...

On Church Discipline for Dissenting Groups
Editors’ Note: This article is part of the Public Square 2014 Summer Series: Conversations on...

Yard Work in the Kingdom of God: On False Conceptions...
Since the male-female relationship is at the heart of divinity and simultaneously at the...

I was at the Ordain Woman action but...
Editors’ Note: This article is part of the Public Square 2014 Summer Series: Conversations on...

Mormon Women, Traditionalists and Feminists: An Evolving...
Given the dizzying array of mixed messages, diverse doctrinal interpretations, and evolving...

Mormon Women: Some Global Perspectives
Taking stock of Mormon communities outside the U.S. yields a more complete picture of the...

Eternal Womanhood and the Limits of Public Recognition
The challenge is to enrich LDS language about and for women without equating it to secular...
Patheos Archives 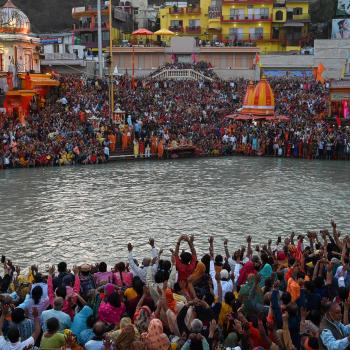 Ramadan for Christians – a modest journey into Islam
Kathryn Shihadah
5

Are We Seeking Validation by Tolerating Toxic Relationships?
Danielle Kingstrom
6

Tony Perkins: Getting Rid of the Filibuster Would Lead to the "End of...
Hemant Mehta