A Tale of Two Churches

At the corner of Massachusetts Avenue and Beacon Street in Boston sits an awe-inspiring church building. The gray stone front and the ornate stained glass reflect the glory years of a bygone era of the American Church. The first time I approached that corner, I felt intimidated by what must have been an impressive history associated with that building. But when I turned the corner I realized that the church building is literally a façade. Two of the outer walls of the church remain, but the actual church building behind the walls had been demolished and a luxury high rise condo now occupies the former sanctuary space.

Throughout many major cities in North America, there are numerous church structures that hold an impressive history but currently host a very small group of worshippers on Sunday morning. A massive church building dominates a central and busy intersection in Cambridge, Massachusetts. On a typical winter Sunday, the church, which is unable to afford heating the spacious sanctuary, meets in a small back room. It would not be appropriate for a dozen or so senior citizens to meet in a thousand-plus person sanctuary. Within a half-mile radius of that church, there are close to fifty churches (most of them immigrant, ethnic minority, or multiethnic churches) that are crammed into much smaller spaces. Right down the street from that large empty sanctuary are over five hundred worshippers from five different congregations meeting in a small, cramped space — the host congregation of about forty worshippers, a multiethnic congregation (with the largest group being Asian-American college students), a Haitian congregation, a Cape Verdean congregation, and a Friday night gathering of Chinese international students. The contrast between the large, near empty, church building at the busy intersection and the crowded smaller church building down the street illustrates the reality of 21st-century American Christianity — the white churches are in decline while the immigrant, ethnic, and multiethnic churches are flourishing.

As many lament the decline of Christianity in the United States in the early stages of the 21st-century, very few have recognized that American Christianity may actually be growing, but in unexpected and surprising ways. The American Church needs to face the inevitable and prepare for the next stage of her history — we are looking at a non-white majority, multiethnic American Christianity in the immediate future. Unfortunately, despite these drastic demographic changes, American Evangelicalism remains enamored to an ecclesiology and a value system that reflects a dated and increasingly irrelevant cultural captivity and is disconnected from both a global and a local reality.

Fifty years ago, if you were asked to describe a typical Christian in the world, you could confidently assert that person to be an upper middle-class, white male, living in an affluent and comfortable Midwest suburb. If you were to ask the same question today, that answer would more likely be a young Nigerian mother on the outskirts of Lagos, a university student in Seoul, South Korea, or a teenage boy in Mexico City. European and North American Christianity continue to decline, while African, Asian, and Latin-American Christianity continue to increase dramatically. In the year 1900, Europe and North America comprised 82 percent of the world's Christian population. By 2050, African, Asian and Latin American Christians will constitute 71 percent of the world's Christian population. But understanding the dramatic changes in Africa, Asia, and Latin America is only a part of the equation.

These changes are not only occurring globally, they are also occurring locally. A U.S. Census Report in 2008 revealed that "minorities, now roughly one-third of the U.S. population, are expected to become the majority in 2042, with the nation projected to be 54 percent minority in 2050. By 2023, minorities will comprise more than half of all children." Meanwhile, national trends seem to indicate that the trend of a non-white majority America will hit the churches faster than it will hit the general population. This trend is due in large part to the sustaining of American Christianity by newly arrived immigrants who bring their Christian faith with them. As sociologist R. Stephen Warner points out, "What many people have not heard . . . and need to hear is that the great majority of the newcomers are Christians. . . . This means that the new immigrants represent not the de-Christianization of American society but the de-Europeanization of American Christianity" ("Coming to America," Christian Century, 2004). Contrary to popular opinion, the Church is not dying in America; it is alive and well, but it is alive and well among the immigrant and ethnic minority communities and not among the majority white churches in the United States.

So, You've been Widowed
Mark Williams
3 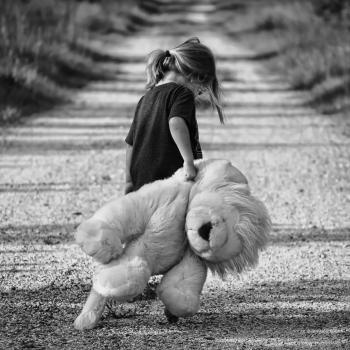 AWAKENING: A Zen Reflection
James Ford
About
Get Patheos Newsletters
Get the latest from Patheos by signing up for our newsletters. Try our 3 most popular, or select from our huge collection of unique and thought-provoking newsletters.
From time to time you will also receive Special Offers from our partners that help us make this content free for you. You can opt out of these offers at any time.
see our full list of newsletters