The Power of Compassion

As a long-time student of Ecology, Environmental Ethics, and "Green Religion," I've long thought that Buddhism as a religion has a great deal to bring to the conversation around caring for our planet. Today, many Buddhist leaders and organizations speak of the importance of preserving nature, reducing consumption, and developing care and concern for the environment. Last month, when I wrote about The Resource Innovation Group (TRIG) "Call to Action for U.S. and World Leaders to Proactively Address the Adverse Psychological and Social Impacts of Climate Disruption," there were already a great number of individuals from a Buddhist background on the list of signatories, far, far more proportionally than any other religious group. While this may not signify much more than a few moments of typing, it does at least show that Buddhists are aware and willing to put themselves out there in the recognition of harms that are already developing due to human made climate change.

As it turns out, however, many scholars, including my Ph.D. supervisor, Damien Keown, are at least a bit skeptical about the contributions Buddhism can bring to this conversation. As he wrote in a 2007 article:

Whether Buddhism has a compelling ecological dimension or not has been a much discussed question in recent years. I think I should put my cards on the table at the outset and say that I count myself among the skeptics in this respect. I see little evidence that the Buddha or his followers, at least down to modern times, have been greatly concerned with questions of ecology. If anything, there is more evidence of a negative presupposition about the value and status of the natural world in Buddhism. In contrast to Christian teachings, the world was not created by God who, as the book of Genesis tells us (vv. 9ff), saw that his creation was good; and being good, worthy to be preserved. On the contrary, in Buddhism there seems to be an acceptance that, even an expectation that, the world will decline. This is thought of as a basic characteristic of the cosmic order: the eventual destruction of the environment is a basic feature of Saṃsāra, and is exactly what we should expect.

How can Buddhists, particularly in the U.S., be so environmentally engaged if their religion itself holds so little in terms of clear ecological values? Keown goes on to quote a prominent Buddhist ecology writer Stephanie Kaza as saying "At this point it is unclear whether ecological practices are primarily motivated by Buddhist tradition or by American environmentalism" (quoted in Sahni, 37).

Yet not all is lost, as Keown goes on to suggest that a plausible, virtue ethics centered approach might be teased out of existing concepts in Buddhism (focusing on the Pali texts). Again quoting Sahni, we read in Keown's paper:

In all likelihood the early Buddhists would view the environmental crisis as a psychological crisis. They would not blame inferior technological development or poor conservation methods as the cause of the crisis, but bad behavior and attitudes (greed, hatred, and delusion). This can be deduced from the fact that all problems are traced in Buddhism to perverted views, and hence, ultimately to a dysfunctional state of mind. (p. 13)

"So what does this mean in practice?" Keown asks later in the paper. In one area, meat consumption, he suggests that the virtue of temperance could be encouraged to reduce consumption of meat, at least in places where it is not practical to impose a universal rule demanding vegetarianism. Further, he notes, the virtue of compassion could lead Buddhists to campaign for the end of practices such as factory farming. To this end, Buddhists could start with a visit to shabkar.org for a wealth of resources on Buddhism and vegetarianism. From their main page: 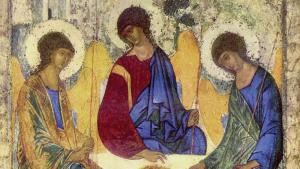 The Trinity in 3 Inflections: Perspectives on the Triune God
Jack Hartjes
2

Time For A Serious Conversation About Who We Are
C. Don Jones
3 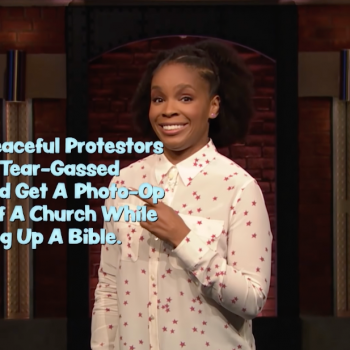 Trump Said Nobody’s “Done More for Christianity" Than Him. Here's What He Did.
Hemant Mehta
About
Get Patheos Newsletters
Get the latest from Patheos by signing up for our newsletters. Try our 3 most popular, or select from our huge collection of unique and thought-provoking newsletters.
From time to time you will also receive Special Offers from our partners that help us make this content free for you. You can opt out of these offers at any time.
see our full list of newsletters