Here, the Rev. Dr. Jacqui Lewis, Senior Minister of Middle Collegiate Church and Executive Director of The Middle Project in New York City, responds. The Rev. Dr. Lewis is an activist, preacher, and fierce advocate for racial equality, economic justice, and LGBTQ equality. Ordained in the Presbyterian Church (USA), Lewis is the first African American and first woman to serve as senior minister at Middle Collegiate Church, which was founded in New York City in 1628. She is the author of The Power of Stories: A Guide for Leading Multi-Racial and Multi-Cultural Congregations and the children's book, You Are So Wonderful! She is currently writing a book about finding a grown-up God.

I am the senior minister of Middle Collegiate Church, an almost 1,000-member multiracial, multicultural, fully inclusive congregation where everyone is welcome just as they are as they come through the door. Our ministry is welcoming, artistic, inclusive, and bold. I am also the Executive Director of the Middle Project, which prepares ethical leaders for a more just society. Together, Middle Church and the Middle Project host a conference to train leaders in multiracial congregations to boldly work against racism, homophobia, sexism, and economic disparity. I also host a show called Just Faith on MSNBC's Shift digital platform.

I am inspired by Traci Blackmon and the young leaders in Ferguson. By Linda Sarsour, Tamika Bell, and the Justice League. By Otis Moss III at Trinity UCC in Chicago and by Sister Simone Campbell and the Nuns on the Bus. By Sharon Braus, Rabbi at Ikar in Los Angeles. All are working to dismantle racism and the scourge it leaves regarding housing, education, incarceration rates, voting rights, and so on.

This is the most pressing civil rights issue: Black lives simply do matter as much as other lives. Police violence. Poverty. Poor schools. Persistent portrayal in the media — still as either the rare Oprah or Will Smith or problems preying on each other in Black-on-Black crime. This is proof. When Black Lives Matter then all lives will matter.

Dr. Hussein Rashid preached at Middle Church on King Day this year. He is angry at Islamaphobia. And he said he must acknowledge that although Islamaphobia is a pain in his butt, racism is the boot on his neck. Bend the Arc, a Jewish Partnership for Justice, organized a "die-in" in D.C. to protest violence against Black lives. All over the nation people of faith are in the movement for the value of Black lives. And we understand the intersectionality of the issues of immigration, refugees, Islamaphobia, xenophobia, and racism.

One of my heroes is the Rev. William Barber III [link to his page] of Forward Together/Moral Mondays. His movement is grounded, multiracial, multicultural, and historic.

What question haven't we asked that you'd like to answer?

What is the one issue every community of faith should be addressing from the pulpit, the classroom, in the community, on social media and in the public square? 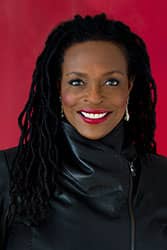