How art is utilized within the various theologies of paganisms will vary, but it would be fairly accurate to say that art in some form is central to the practices of paganisms. Where paganisms are unique from other religions is that proselytization is not a goal. There is something unique about the way art is centralized in various pagan traditions that differs from its role in most mainstream and Abrahamic religions. While every religious tradition has some form of art that is considered sacred, paganisms elevate a variety of art forms for the pure sake of the beauty of art and for the methodologies and processes of making it. In paganisms, the acts of creation of or participation in various arts are often a form of magic.

One of my earliest introductions to the idea of art as magic was in reading various fictional accounts of Morgaine, priestess of Avalon, as she designed and fashioned the scabbard for Excalibur, the legendary sword given by Avalon to her brother, King Arthur. Morgaine was a devout priestess consecrated to the Goddess and trained in all of the magical arts. In creating Excalibur's scabbard, she was participating in traditional "women's work" and household arts of embroidery, sewing, and leather craft. She was doing this in a sacred manner that also included meditation, fasting, and sleep deprivation. At the same time, she was imbuing the scabbard with spells against blood loss and in protection of its bearer. The concept of the practical but beautiful, functional but personal, arts that were (and still are) commonly associated with gendered women's work had a profound effect on me as a solitary pagan, a budding feminist, and an untrained artist. In pagan theologies, the very act of creativity is a form of worship, magic, and reverence.

As with most religious traditions, music is an integral part of many pagan practices. This can take the form of chanting, spell-casting (which is often rhythmic), singing, and playing of musical instruments. Drumming is especially popular within my traditions, as the drum is believed to connect the heartbeat of all living creatures to the heartbeat of the earth. Within my own traditions drums and bells are used to call down the spirits. Dance is also used, both in honoring spirits, earth, elements, elders, and others, and during certain rites such as possession. 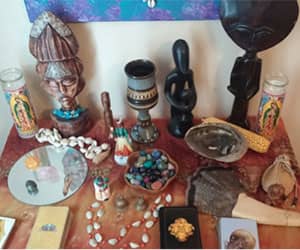 Iconography is another art form that exists in many religious traditions, but nowhere is it so centralized as in various pagan traditions. Altars are a great example of the use of iconography. Across many, if not all, pagan practices, altars are a common form of worship. Depending on the tradition, an altar may contain statues, photos, paintings, or other depictions of gods/goddesses, saints/spirits, animal spirits, fairies, ancestors, and more. Many practitioners have multiple altars to serve different purposes or even to express a multiplicity of paganisms that one practices. For example, I have one small altar with photos of ancestors — literal and figurative — and spirit glasses, and other small altars of collections of natural elements and candles, as well as a larger altar that serves as my centralized space of worship and collection of Orisha/Loa and ancestor/spirit elements.

Aside from altars, my house is peppered with mixed media paintings and other artwork, some my own creation and others by other artists, designed to honor specific Orisha/Loa of the Santeria/Vodun traditions. I consider myself more a practitioner of Hoodoo, that spiritual mix of my cultures as a North American Indigenous and Black person, though I also study Santeria, Vodun, and Candomblé. As I relate to Hoodoo as a natural part of my own culture mix, I am not initiated into the Caribbean traditions that include the tendency to obscure the Orisha/Loa behind Catholic saints. I feel no need to hide my practices or my devotion to Obatala and Yemanja. I create abstract art to represent these spirits, but I also respect (and understand the historical significance of) the traditions of clothing the spirits in Catholic dress and the iconographic art that has arisen from the practice.

While few paganisms are interested in proselytization, we are in need of educating within our own communities. Racism within white pagan communities is sadly very common, for example. Within several African and Indigenous based spiritual practices there is homophobia and transantagonism that is not true to the original traditions but an element of colonization that has been brought into traditional spiritual practice. Even as people attempt to decolonize their spiritual practice, they hold onto comforting systems that continue to oppress minorities within the minority communities.