Rembrandt and the Courage to See: A Meditation on His Self-Portrait, 1659

Let's get real. Naming dental whitening strips after Rembrandt is like naming mac and cheese after Thomas Aquinas. The pious among us may not find that funny, but some branding guru at Johnson & Johnson clearly did. Linking the 17th-century master of the Dutch Renaissance to that particular cosmetic triviality is painfully ironic to anyone familiar with his work.

Rembrandt spent his life studying the subtle, complicated, and textured interplay between light and dark; his is a visual corpus in chiaroscuro unlike any other. But Rembrandt's work is so powerful precisely because he spent far more time in the oscuro, the dark register, than in the chiaro, the light one. His brush lingers in the shadow, drawing it out into a rich variety of shades and colors — at times so delicate and mist-like that it forms a veil over the canvas. Other times, he sets down thick impastos that project the boldness of his painterly virtuosity.

His prolific output was dominated by paintings and etchings of biblical scenes, along with a staggering number of self-portraits. His biblical images are not mere illustrations; they are forays into the heart of holy subjectivity. Rembrandt had an uncanny capacity to see his subjects — even the imagined ones — and to translate their experience into ours by some invisible power of empathy. As life afflicted him with successive wounds, these works increasingly turned toward a profound sense of inner struggle. Rembrandt wasn't simply painting. He was raiding his own humanity, smuggling back treasures of insight for any who would have the courage to peer down into that place where the spirit meets the bone.

His style, like his life, was not as clean and exacting as his Dutch predecessors, or as the Flemish competition that would supplant him in the twilight of his career. Rembrandt pressed the shadow into every crevice with relentless truth; he prodded the flesh, exposing its mortal elasticity. His subjects are unmistakably human, very often from society's margins — women, Jews, children, beggars, working class. Rembrandt had an eye for the overlooked. Somehow, though, he rendered these with such daring honesty that their particular humanity becomes diaphanously transparent to the universal character of the whole human soul; his canvases transformed into a tent of meeting between "I" and "Thou."

Nowhere is this more evident than in Rembrandt's self-portraits. As we gaze into them he gazes back out at us with the unmistakable quality of his own life: brooding and broken, expressive and carnal. He, like we forever grappling with his life's meaning, is seeking to discover and communicate something about the man staring back at him. While undeniably his own, it is our life too.

Rembrandt's self-portraits reveal the fullness of our human condition in all its pathos. Unmasking our vanity and our pride, he exposes our failure of nerve — that part of us that wants to look away from an unvarnished view of ourselves. He does not do this to mock us, but out of compassion. He knows that only by going deeper will we encounter that mysterious grace which alone is born of profound suffering and loss.

Only one painting has ever changed my life, Rembrandt's 1659 Self-Portrait. Rembrandt's beloved wife, Saskia, died only a year after bearing their son, Titus. He fell in love with Geertje, Titus's nanny, entering upon a sexual affair that ended very badly. When the fickle painter became infatuated with another young woman, Hendrickje, he attempted to discharge of Geertje in a civil way. Geertje wasn't having it. She brought him to court for breach of marriage contract, soiling his "honorable" name. Filled with rage, Rembrandt had Geertje committed to a women's reform house for five years. Had Geertje survived this cruelty, she would have seen Rembrandt humiliated by bankruptcy that same year.

This was a pivotal moment for the onetime VIP of Amsterdam's most fashionable district. Rembrandt could have done the predictable thing. He could have broken out the whitening strips. He could have bleached the truth of his situation for generations to come, painting himself in a victorious light. But he didn't. Instead, he embarked upon the painting that literally stopped me in my tracks the first time I saw it. Art as theology demands that we wrestle with the shadows, that we become vulnerable. Rembrandt's Self-Portrait, 1659 does just that, chronicling the beginning of his journey from playboy to prodigal with devastating candor. 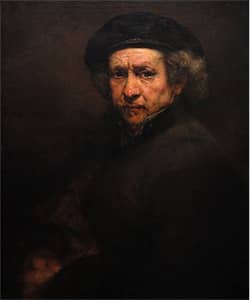