Most Witches and Pagans know that Halloween has its origins in Samhain. An Autumn festival which honors the dead through acts of remembrance such as the Silent Supper. Despite Christian belief that Samhain is a time of evil mischief, the truth is the holiday we celebrate is not. Rather, Samhain is one among many festivals which honor the dead at this time of year. Let’s take a brief look at Samhain, and one particular tradition which my family and I observe — The Silent Supper.

The Origins of Samhain

Every October 31st (or May 1st for our Southern Hemisphere friends), people gather to celebrate the cycle of birth, life, and death (for some belief systems this includes rebirth as well). While Witches, Wiccans and Pagans of all types may work with the ancestors or Mighty Dead throughout the year, traditionally, Samhain is known to be a “thin” time. A period when the veil between worlds can be more easily crossed. Through activities such as psychic readings, seances, etc., “ease of access” is more available.

Winter is looming for many in the Northern Hemisphere. Final harvests are gathered. Preparation for the long, cold dark begins. Samhain (pronounced “sow-ehn” or “sow-een”) is not rooted in evil. Rather, there is recognition of death as a natural part of life and honoring those who’ve passed throughout the year. In ancient days, this is how people’s such as the Celts could process loss/grief and prepare for the months ahead, when food could become scarce.

The Celts also believed the spirits of lost loved ones could cross over from the Otherworld on Samhain, giving them a chance to reunite for a short while. Additionally, the Druids would build a large bonfire where the community would gather for feasting and sacrifice, then take a flaming brand for their own hearths as protection over the Winter.

Over the centuries, Christians have mistaken Samhain observances, meant to honor the dead, as “evil.” Why? Ancient people believed the thinning spectral veil also allowed Otherworld spirits (Pukah, Dullahan, Sluagh) to cross into the living world to cause mischief or harm. So, in addition to communication with the dead (a forbidden practice to Christians), there is an aspect of protection from nasties inherent in the celebration. Hence the spooky reputation.

Traditions and beliefs surrounding the final harvest have passed through the ages. Much of what we recognize today originates from Medieval observance of Samhain. Halloween was born of an attempt by Pope Boniface in the 5th century to stifle Pagan traditions. He tried to move Samhain to May and made “All Saints’ Day” to be celebrated on November 1st, followed by “All Soul’s Day” on November 2nd.

People, however, did not want to give up their time-honored final harvest beliefs and traditions. Thus, “All Hallow’s Eve” assumed it’s place on October 31st and in time became known as Halloween. And as a result, Samhain has survived for those of us who are now Witches, Wiccans and Pagans to honor and restore as our sacred holiday.

Also known as the “Dumb” (as in “mute”) Supper, there are several origins for this Samhain ritual. For young Victorian women, the “dumb” supper was attended and performed as love magick. Supposedly, teenage girls would prepare and set a table for supper backward. According to an article citing folklorist Wayland Hand, “The tables were set as wrongly as possible; the chairs were turned backwards; the meal was to be served dessert first.” If anyone spoke throughout the process, the spell was broken. Exactly at midnight, the spectre of a young lady’s husband would appear to sit down beside his intended. Or arrive in-person to show their intent.

Today, for Witches and Pagans, the “dumb” or “silent” supper is performed as an invitation to ancestors, and those who’ve crossed over, to share a meal. There are some debates as to the origins of this more somber ritual but the idea is to honor the ancestors, the Mighty Dead, etc. The picture above is from our own observance last year.

Many people perform their Silent Supper in the evening on Samhain. We live in a community with a large number of children who would be trick-or-treating. So, rather than wait until late evening, we choose to have our’s for the noon meal. As performed by Ode and myself, the ritual had profound meaning for both of us. And in my mind’s eye, as we ate our meal thinking of our deceased friends and family, the spirits arrived one by one to join us. My point is, choose the time which works best for your situation if you want to include a Silent Supper as part of your Samhain observance.

So, you may be wondering how you go about hosting, performing, eating a Silent Supper. Honestly, it’s not that difficult and when done with intention is very meaningful. First, do not expect participants to know what to do. Tell your guests what to expect and how to act throughout the ritual beforehand. That way everything can be performed as intended and no one will feel awkward.

Preparation begins by cleansing the space where the table will be set. We used our altar room but this could be a dining room or even a kitchen table. Wherever the meal will be served and observed. You can do this by using sacred smoke, asperging the area with salt or blessed water or whatever method you use to make a space sacred. Do not have cellphones, televisions, radios, or allow any kind of distracting device in the area or brought in by guests.

Set the table as you would for a normal meal or dress the table in black dish ware, table cloth, etc. Whatever feels right to you, do it. Keep in mind how many corporeal guests will be sharing the meal and leave one place setting for the honored dead. Do it up right. Plate, silverware, glassware, napkin, etc. You can decorate the center of the table with symbols of the harvest (gourds, leaves, red and yellow flowers) or whatever suits your observance. We chose black and purple flowers. You can also shroud the chair of the honored dead in black or white cloth if you wish. Candles may be arranged and lit to represent the dead as well. Photos of the departed may also be placed on the table or around the area. Follow your intuition. Make whatever food you wish to serve.

For the ritual, everyone must enter the room where the meal is being served without speaking. Take hands, either seated or standing, to invite the honored dead and bless the meal. While the guests focus thoughts and intention on the honored dead, the host/leader serves food onto the spirit’s plate and fills their glass. Then guests may fill their own plates and glasses. The meal is shared. No one speaks throughout the meal. When everyone is finished with their food, the group may link hands again to thank (without words or voice) the beloved spirits for joining the meal. Everyone leaves the space in silence.

Retire the guests to a prepared place where each can share thoughts and reflections on the meal (if they wish – no pressure – the Silent Supper can be overwhelming to sensitive emotions), share stories about loved ones, etc. Once everyone has left, clear and clean the space as normal. The food can be moved to an ancestor altar or disposed of in a manner which seems appropriate.

If you’ve never prepared or shared a Silent Supper, then I recommend it for those seeking a way to honor their deceased loved ones and ancestors. You can do this ritual as a solitary (if anything it’s easier because you don’t have to worry about others talking to you) and it’s just as meaningful as when done in a group. This ritual can also be a lovely precurser to a seance or divination session. However you choose to celebrate, Samhain is a time to focus our thoughts upon those across the veil and renew our understanding of death.

**This is a pumpkin recipe found in a newspaper years ago which I’ve adapted.

Brown the beef/turkey in a skillet. Drain grease. Add the cream of mushroom soup, milk, and rice. Stir until combined. Add the soy sauce and spices. You can do this to taste (for instance, the salt in the mushroom soup and the soy sauce may be enough, so add extra pepper, thyme, sage, smoked or sweet paprika or whatever spices you prefer). Add in the mushrooms if using. Stir until combined.

Once the meat mixture is ready, stuff into the hollow, clean pumpkin. Place top with stem on pumpkin, loosely. Put the pumpkin on a baking sheet covered in aluminum foil. Bake for 1 hour. 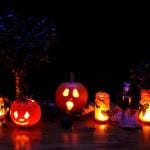 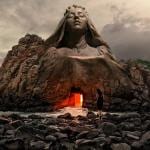 October 7, 2019 Working with Gods: Learning Devotion Through Hekate
Recent Comments
2 Comments | Leave a Comment
"As I was taught, a Talisman is a generally charged object that has a single ..."
Kyllein MacKellerann " Talisman, Amulet, Charm. Oh My!
"Thank you, I think I needed to read this today."
Adawn B Even When You Don’t Feel It, ..."
"I was referring to numbers. There are more Presbyterians than self identified Neo Pagans by ..."
Gordon Cooper Witch: Origins, Definitions and Using The ..."
"I find it appalling that Anthropology and most dictionaries are still using these prejudicial definitions ..."
Rev SLP Witch: Origins, Definitions and Using The ..."
Browse Our Archives
get the latest updates from
3 Pagans and a Cat
and the Patheos
Pagan
Channel
POPULAR AT PATHEOS Pagan
1

The Wiccan Who Was Mean to...
Fivefold Law
Related posts from 3 Pagans and a Cat